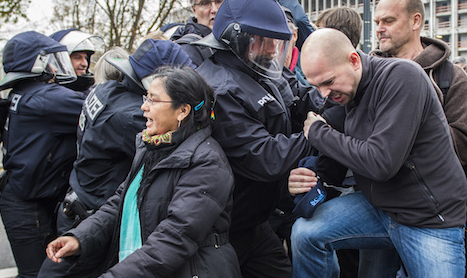 At least 10 supporters of the migrants were arrested, when the police clashed with activists who took to the streets of Berlin to shout down anti-migrant marchers of the populist-nationalist Alternative for Germany (AfD) on Saturday.

Police said an officer was lightly wounded in the brawl. Police said some 3,500 people turned out for the anti-migrant protest, which gathered under the banner “Asylum Has Its Limits — Red Card for Merkel”. Organisers had expected a turnout of up to 5,000.

Five counter-protests in support of migrants were planned Saturday in Berlin, with an expected turnout of 7,000.

AfD is one of the principle critics of the top European economy's open-door policy under Chancellor Angela Merkel towards refugees fleeing war and persecution. Germany this year faces a record influx of up to one million migrants amid Europe's worst refugee crisis since World War II.