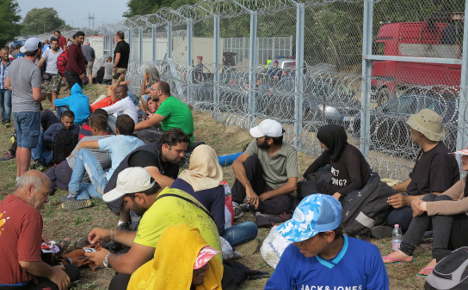 Catholic bishop of Essen Franz-Josef Overbeck made the comments during a discussion on the refugee crisis with vice-Chancellor Sigmar Gabriel on Tuesday.

Angela Merkel's Christian Democratic Union (CDU) and coalition partner the Christian Social Union want to set up so-called “transit zones” – camps outside Germany's borders where asylum seekers would be placed while their applications are processed.

Their centre-left coalition partner the Social Democratic Party (SPD) have so far resisted such a measure.

Overbeck said during the discussion that refugees' lives in such camps would “be like that in a concentration camp.”

Thomas Bareiß, a CDU MP from Baden Württemberg, called on the bishop to take back his comments and apologize.

On Wednesday Overbeck explained his choice of words, saying “the way in which refugees would be handled and enclosed there made me – and other people from the Ruhr region – immediately think that it would be something like that.

“I'm not going to say that it is the same. I only wanted to say that we mustn't allow such a thing to take place.”

“If we were to build these zones we would be building walls again,” he added

This is not the first time the bishop has created headlines with his utterances on the refugee crisis. A few weeks ago he told a congregation that Germans must be prepared to sacrifice their wealth.

“Just like refugees must change their living conditions, we will have to do it too,” he said, causing a torrent of criticism on social media sites.