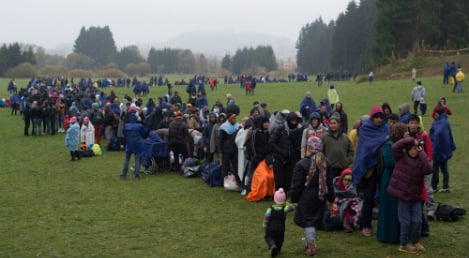 Refugees at the Austrian-German border on Thursday. Photo: DPA

The report, presented on Thursday by the Association of German Cities, found that a total number of 500,000 new arrivals would cost €7 billion overall, while 1.2 million refugees would cost €16 billion.

That adds up to a maximum of €5.5 billion more than has already been promised to local governments by Chancellor Angela Merkel from federal funds, the association's finance chief told reporters in Berlin.

Merkel had promised €670 per month per refugee to Germany's 16 states.

But there is no rule governing how the money should be distributed to local authorities, who are on the front lines of caring for migrants, from the state level.

States must agree to “a transparent, nationwide process” for fairly distributing the federal cash, general manager for the cities association Stephan Articus insisted.

He added that costs of around €1,000 per month per refugee were more likely, demanding that states should add an extra €300 to the fees.