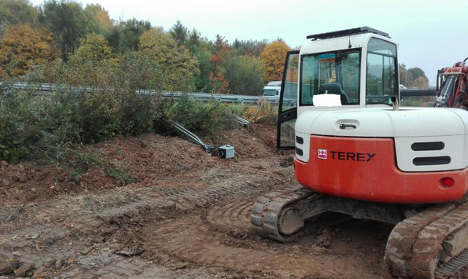 The stolen digger with the uprooted speed cameras in the background. Photo: Polizei Marburg

Everybody knows that Germany is one of the few countries in the world – outside North Korea – where there are still no speed limits on the Autobahn (motorways).

While a recent survey suggests that public attitudes to this eccentric Teutonic tradition are changing, it appears some people are so committed to its maintenance they've started to take matters into their own hands.

That at least is one explanation for the mysterious events which took place on the outskirts of Marburg on Tuesday evening, where unknown assailants dug up police speed cameras with a stolen digger.

Police assume that the perpetrators used a universal key to start the digger, which was stolen from a nearby building site, before they made directly from the two-lane road heading north past the university town in Hesse.

They then ripped three of the speed cameras out of their foundations, causing several thousand euros worth of damage, before ditching the vehicle and making off into the night.

A police spokesperson told The Local that they have no hard evidence as to the motive, but they speculate that it was committed by someone with “rejection of speed cameras.“

If this was indeed a statement of protest against the curbing of drivers' freedom it was quite a radical one. Even the most dedicated of petrolheads are content with only having no speed limits on motorways, rather than also two-lane roads.

Police are now urgently searching for witnesses who may have seen the crime while driving past.