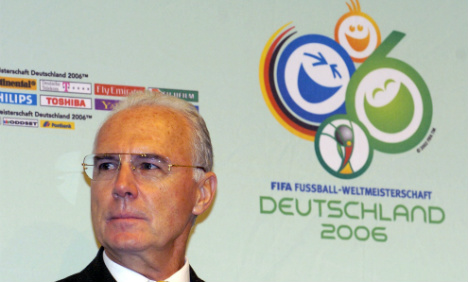 Beckenbauer was the head not only of the World Cup organising committee but also Germany's bid.

The 70-year-old said the bid committee accepted a proposition that “should have been rejected” and said he took “full responsibility for this mistake”, although he added in a written statement that “no votes were bought”.

This was the first time the former Germany international and coach had acknowledged any error was committed.

“In order to obtain a FIFA grant, we accepted a proposition coming from FIFA's finance commission that the implicated parties should, in retrospect, have refused,” said the 'Kaiser'.

“As president of the organising committee at that time, I take responsibility for this mistake.”

However, Beckenbauer added that “no votes were bought to earn the right to organise the 2006 football World Cup.”

Der Spiegel had claimed that the votes of four Asian members of FIFA's executive committee had been bought as Germany beat South Africa by 12 votes to 11, with one abstention, in 2000 to win the right to host the 2006 global showpiece.

None of those four, one of whom is now dead, have commented on Der Spiegel's claims while the German Football Federation (DFB) strongly denied any impropriety and said its own independent internal investigation was ongoing.

Beckenbauer said he was interviewed by the investigation committee on Monday in Munich.

FIFA has also launched its own cash-for-votes investigation into the 2006 World Cup.

The DFB acknowledge that a 6.7 million euro payment was made to FIFA in April 2005 by the World Cup organising committee but denied Der Spiegel claims that the money was used to repay a loan from the now-deceased former CEO of German sportswear giant Adidas, Robert Louis-Dreyfus – Niersbach claimed that sum was in fact the loan itself.

Der Spiegel said the loan was a slush fund used to buy votes.

Former DFB president Theo Zwanziger has backed der Spiegel's assertion there was a slush fund and claimed that Niersbach knew about it in 2005. Der Spiegel said Beckenbauer was also in the loop.

Niersbach has claimed the €6.7 million payment to FIFA was a down-payment to secure a €170 million subsidy from the world football governing body, something FIFA denies.

Niersbach said that in January 2002, FIFA president Sepp Blatter – himself now suspended in another, linked corruption investigation – held talks with Beckenbauer, who was told FIFA could provide 250 million Swiss francs (then worth approximately €170 million) in subsidies.

Niersbach said that in return 10 million francs (then worth €6.7 million) must be transferred to the FIFA finance commission, something the world football body says is against its regulations.

Beckenbauer was apparently prepared to stump up the 10 million francs but eventually it was Louis-Dreyfus who did so, according to Niersbach, who claimed to be unaware of any of this in 2002.

A few years later the sum reappeared on the DFB accounts as it had to be repaid to Louis-Dreyfus.