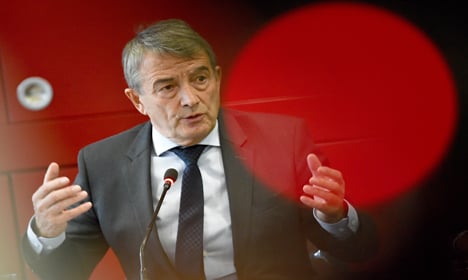 DFB President Niersbach: "There was no slush fund, there was no vote buying." Photo: AFP

According to the website MEEDIA, the DFB's lawyer Christian Schertz has sent four demands for a right of reply to the Hamburg-based Spiegel. The DFB was unavailable for comment on Saturday.

The DFB is in crisis over claims in a recent Spiegel report that the 2006 World Cup bidding committee accepted a 10.3 million Swiss francs (€6.7 million at the time) loan from ex-Adidas chief Robert Louis-Dreyfus.

Spiegel alleges that the loan was used to buy the votes of four Asian members of FIFA's 24-strong executive committee to ensure the 2006 World Cup was awarded to Germany.

DFB president Wolfgang Niersbach has always categorically denied anything shady about the 2002 payment.

Under German media law, any individual or organisation has the right to refute any claims made against them by an outlet in print or online.

All four demands submitted by the DFB are directed towards parts of the Spiegel article where there is no evidence or details to back up the allegations made and they are set be included in next Saturday's edition of Spiegel.

On Thursday, Niersbach claimed the €6.7 million payment was made to FIFA as an upfront payment transferred in order to secure a 170 million euro subsidy from world football's governing body.

However, FIFA quickly refuted Niersbach's version in a strongly worded statement and called on the DFB to cooperate with its investigation into the ongoing cash-for-votes allegations.

Meanwhile, ex-DFB president Theo Zwanziger has told Spiegel he was certain that there was a slush fund, contradicting Niersbach's claims and accusing him of lying.

“It is clear that there was a slush fund in the German World Cup bidding process,” he said in an interview published Saturday.

“It is also clear that the current DFB president (Niersbach) knew of this already in 2005, and not only a few weeks ago as he claimed,” added Zwanziger, who headed the German Football Association from 2006 to 2012.

“The way I see it, Niersbach is lying,” he claimed.

The scandal has shaken football-mad Germany, where the 2006 World Cup is still refered to as a 'summer fairytale'.

The Bundestag's sports committee has summonsed Niersbach for an interview to explain himself, according to the Frankfurter Allgemeine Zeitung.

The committee's chair Dagmar Freitag is said to have set the date for November 6 in Berlin.

Although Niersbach is not obliged to accept the invitation, to refuse would reflect badly on both the president and the organisation he represents.