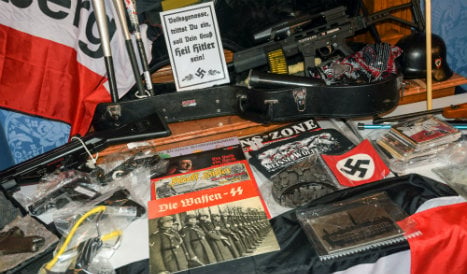 Officers swooped on the Bavarian town of Bamberg on Wednesday evening, arresting 11 men and two women whom they said were members of a far-right movement and a criminal gang, prosecutor Erik Ohlenschlager told a news conference.

The raids came as Germany's Federal Criminal Police Office (BKA) reported a surge in crimes targeting refugee centres, warning that the ongoing migrant crisis was increasing the risk of extremist attacks on politicians. This Second World War-era Luger pistol was the only live weapon found in the raid. Photo: DPA

Ohlenschlager said the suspects were planning an attack on two asylum-seeker homes in Bamberg with the aim of setting them on fire with “very dangerous” flammable substances.

The group also planned to ransack premises used by far-left activists in the town and beat up those inside, police said.

The violence was planned to coincide with a far-right protest outside a refugee centre on October 31, which the town mayor has said he may seek to ban.

More than 670,000 people have landed on Europe's shores so far this year and most want to get to Germany, Europe's economic powerhouse.

Tensions have been rising in Germany as Chancellor Angela Merkel has opened the doors to an unprecedented wave of people, Berlin expecting to receive up to a million asylum requests this year.

During July, August and September, there were 285 attacks on migrant centres across Germany — more the entire number in 2014, which stood at 198 offences, the BKA said.

There have been 576 offences targeting refugee hostels since the start of the year, including cases of criminal damage and inciting hatred, 523 of which were committed by far-right extremists, it added.

“Alongside the attacks on asylum-seeker hostels, attacks against officials held responsible (for the influx of migrants), such as politicians or the managers of lodging places, could grow,” a BKA spokesperson said.

The warning came after a mayoral candidate in the western city of Cologne was stabbed in the neck in an attack apparently motivated by her work with refugees.

Henriette Reker, an independent candidate, became the most prominent victim of the anti-migrant backlash on Saturday when a man attacked her with knives on the campaign trail.

She survived serious injuries and went on to win the election a day later.

Security experts have been bracing for a rise in unrest, with domestic intelligence chief Hans-Georg Maassen warning in late September of a radicalisation of rightwing groups and “a greater willingness to use violence” by all extremist groups.