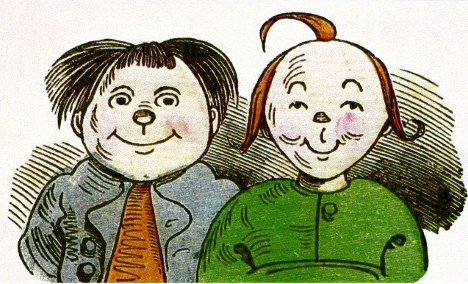 If you've grown up in Germany or have German parents, chances are you'll have come across the grisly tale of Max and Moritz.

This isn't just about switching the salt and sugar pots, though.

“I don't think I've ever read the book myself, but I've had the stories told to me by my parents,” 23-year-old Jana, a student from Berlin told the Local.

“I always found it completely gruesome,” she said. “The pranks, and how they end up being baked at the end, it was all too much for me!”

Now, what could two children possibly do to deserve getting baked into a loaf of bread?

Quite a lot, it turns out. Max and Moritz heading into the oven after the baker catches them.

The deeds of Max and Moritz

The first thing the doomed pair do in the tale is tie some bread crusts together. Not too bad, you might think – until they feed the bread to Widow Bolte's chickens and get them tangled up, killing them all. Widow Bolte finds her chickens killed by the pair.

And things only get worse from here.

After stealing the chickens while the widow tries to cook them, the boys send a local tailor plunging into a river, before burning their teacher's hair off with a pipe full of gunpowder and pouring bugs into their uncle's bed. Uncle Fritz wakes up to a bed full of may bugs.

But soon it all starts to go wrong for the boys.

After a lucky escape from a vat of dough and an angry baker, Max and Moritz finally meet their match when Farmer Melke catches them cutting open his grain sacks. The phrase “going through the mill” gains a literal – and quite frankly, disturbing – meaning here, and the farmer grinds the boys to pieces before feeding them to the ducks.

A notch worse than what today's young mischief-makers can expect when they get caught. Image: Wikimedia Commons

'Unequaled to this day'

“The secret of the book's success is its combination of anarchy and Biedermeier, comedy and an interest in the subversive,” Professor Peter-André Alt, German literary scholar and President of Berlin's Free University told The Local.

Biedermeier refers to works that emerged during a period in the early 19th century when the middle class was expanding and art began to appeal to the sensibilities of people outside the aristocracy.

But the book's rhyme scheme is also important, Alt said.

“The rhymes provide for momentum, musicality and humour,” he explained.

“And we should by no means forget Wilhelm Busch's superb artistic ability, which made his characters unforgettable,” he added.

“These are cartoons in their earliest stages, and unequaled to this day.”


One of the first editions of “Max und Moritz” is at the Wilhem Busch Museum in Hanover. Photo: DPA

Wilhelm Busch was born in 1832 in Wiedensahl, Lower Saxony.

Known for his illustrated cautionary tales, he was also a sharp humourist, satirising Catholicism, religious morality and bigotry – which saw several of his works banned by the authorities.

“Max und Moritz” was one of Busch's earliest works.

After struggling to find a publisher, Busche eventually struck a deal with Munich-based publishing house Braun and Schneider.

Then came the painstaking task of production – with Busch having to take every single one of his illustrations, invert them and transfer them onto blocks of wood for printing.

It seems like the effort was worth it, though: 150 years later and translated into at least 190 languages, the tale of Max and Moritz continues to entertain children both in Germany and across the world.

Let's hope it's not giving them any ideas.