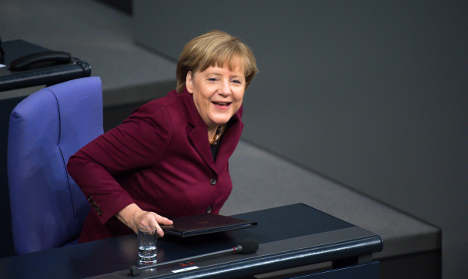 At the centre of the new package is the redefinition of Albania, Kosovo and Montenegro as “safe countries“ in order to speed up the process of sending back asylum seekers from the west Balkans.

According to the new laws, refugees will stay longer in “reception centres” before being rehoused. They will also be given welfare “in kind”, in the form of coupons, in place of the financial support they currently receive.

Under certain circumstances a clear curtailment of benefits is also on the table.

Addressing the Bundestag before the vote, Chancellor Angela Merkel said that while it was fine to tighten up laws, “there is no possibility of sealing ourselves off in the 21st Century of the internet”.

But her speech was countered by a near-simultaneous one from Bavarian minister-president Horst Seehofer, who told his state parliament in Munich that “even for a rich country like Germany, there are limits to immigration, and we can't take everything on that comes to us.”

Seehofer, whose state is the first point of arrival for most refugees in Germany, repeated his demand for an absolute ceiling to the number of refugees that would be taken in by the country.

To reduce the numbers of migrants Merkel must make a “political declaration to the people of the world” that Germany couldn't take any more, he said.

Seehofer may well have been speaking with an eye to political opinion polling, which has seen Merkel's Christian Democratic Union (CDU) and their allies, the Christian Social Union (CSU) led by Seehofer, fall to their lowest ebb since general elections in 2013.

He has made a number of moves to anger the Chancellor, including welcoming Hungarian premier Viktor Orban to a political gathering in September.

In a concession to the pro-refugee lobby, the package of laws aims to ease the bureaucratic restrictions on the creation of new refugee homes.

Furthermore, asylum seekers who are deemed to have a good chance of being granted residency will be provided with integration courses.

The government took the laws to the parliament as quickly as possible after the draft law was agreed at a meeting between the federal government and German states in late September.

The Bundesrat (upper house) is set to discuss the proposed package on Friday.

Criticizing the new laws, refugee association Pro Asyl described it as a “programme for stripping humans of their dignity.”

Die Linke (the Left Party) meanwhile spoke of the most serious attack on refugee rights since the 1990s.

Merkel, speaking hours ahead of a European Union summit, urged the EU Thursday to “show solidarity” in tackling the continent's spiralling refugee crisis.

Underlining the scale of the challenge, Merkel told German lawmakers that “it is not an exaggeration to describe this task as a historic test for Europe”.

As a result, “Europe needs to show solidarity, anything else would be a failure,” she warned.

In a retort to critics of her open door policy to those fleeing war and persecution, Merkel said slamming the door “shut in the 21st century of the Internet era is an illusion”.

Germany itself is expecting to receive between 800,000 and one million asylum seekers this year, and disgruntled local authorities who are struggling to cope with the sudden influx surge have been openly critical of Merkel's policy.

But the chancellor has repeatedly said it was impossible to immediately end the influx, given that the war in Syria, one of the the root causes of the crisis, shows no signs of being resolved.

Highlighting the important part played by Turkey, which is along with Jordan and Lebanon hosting millions of refugees, Merkel said the EU needs to provide support to the country neighbouring Syria.

Merkel is travelling Sunday to Ankara where she will hold talks with President Recep Tayyip Erdogan.