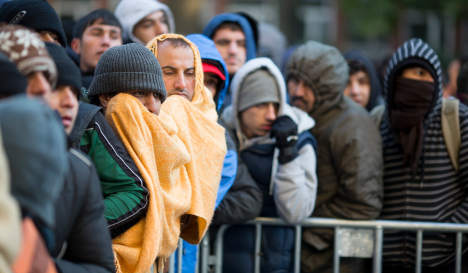 Local authorities have been struggling to cope with a record influx of refugees, and asylum seekers in Berlin have often had to wait days if not weeks to be registered at the centre, known as Lageso.

On Monday, a group of them decided to take their case to the social court, complaining that despite waiting for a week, they were still not registered.

As a result, they were unable to receive any social benefits, including a bed in refugee centre — an urgent need as the winter cold sets in.

A court spokesman told news agency AFP the plaintiffs were seeking to “put pressure on the authorities” by bringing the case.

The court would issue a ruling in a few days, he said.

Over the past fortnight, several similar cases have been brought by individual asylum seekers, he added.

Germany is expecting to receive between 800,000 and a million asylum seekers this year, and local authorities have repeatedly warned they were not able to keep up with the massive influx.

Although Chancellor Angela Merkel insists the country “can do it”, her open-door policy has angered some and even sparked an open rebellion among her conservative allies.