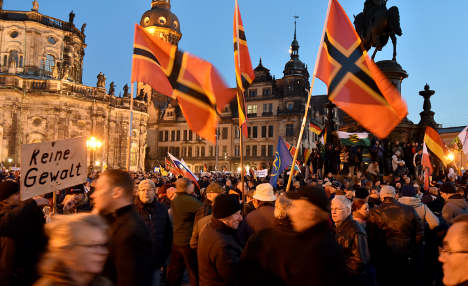 Organizers of the demonstration in the eastern city of Dresden reckoned that around 9,000 people turned up for the Monday night demo, one week before the first anniversary of Pegida's emergence.

Tatjana Festerling, a leader of the group, told a rally of thousands of supporters in the eastern city of Dresden that Merkel's policy of welcoming refugees had turned Germany into a “gigantic camp in the jungle”.

Festerling, who came fourth in Dresden's mayoral elections in June with 10 percent of the vote, denounced Merkel as “irresponsible” describing her as “the most dangerous woman in Europe”.

Police said the demo passed peacefully although there could be criminal consequences for one protester who turned up carrying a mocked up gallows with a sign signalling it was reserved for Merkel and her deputy Sigmar Gabriel.

A police spokesperson said that prosecutors would decide on Tuesday if a crime had been committed.

Galgen – the German for gallows was the top trend on Twitter on Tuesday morning.

Stefan Schweitzer asked “Gallows? Is that the Christian–Western tradition Pegida wants to protect?”

But others pointed out that gallows were a symbol also seen at other more mainstream protests, such as the demo against the TTIP free trade agreement with the USA which pulled in over 100,000 protesters in Berlin on Saturday.

Germany, Europe's largest economy, is expected to take in up to a million people fleeing war and poverty this year, sparking anger among anti-foreigner groups and the Pegida movement (“Patriotic Europeans Against the Islamisation of the Occident”).

At the latest in a series of weekly rallies, Festerling accused Merkel of deliberately refusing to “protect Germany's borders”.

A group of around 250 anti-Pegida demonstrators also turned up but were kept at a clear distance from the Pegida march by police. The two sides were heard to hurl insults at each other from a distance.

Pegida emerged almost a year ago with several hundred people showing up for “Monday strolls” in Dresden, although its numbers grew in the following months.

At its peak, the xenophobic rallies attracted 25,000 marchers in Dresden, but also sparked far larger anti-fascist rallies in cities across Germany.

The movement fizzled early this year following bickering among the leadership and after co-founder Lutz Bachmann sparked uproar with his anti-foreigner slurs and Facebook selfies showing him sporting a Hitler moustache and hair-do.