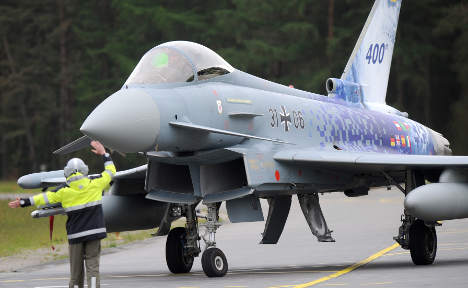 Defence ministry officials told the Bundestag (German parliament) on Monday that the plane has a “manufacturing defect” which affects “the connection between the fin and the rear end of the jet.“

Damage to the structure of the jet could not be ruled out, the ministry has concluded in documents seen by the Süddeutsche Zeitung.

The defence ministry has now suspended orders of further Eurofighters, although the discovery will have “no immediate effect“ on the flight plans for the German airforce's existing fleet.

Germany has ordered 143 of the twin-engined fighter up until 2018. But the jet has been beset by technical problems and has been criticized for overshooting its budget by billions of Euros.

In October 2014 the defence ministry discovered a fault in the jet's fuselage, leading it to temporarily suspend orders.

In 2010 Eurofighters were grounded due to fears over the safety of ejector seats after a Saudi Arabian pilot's seat failed to activate during a training flight, leading to his death.

The Typhoon, a multi-purpose twin-engine fighter jet introduced in 2003, is built by a consortium made up of the European Aeronautic Defence and Space Company (EADS), Britain's BAE Systems and Alenia/Finmeccanica of Italy. It also serves with the British and Italian air forces.