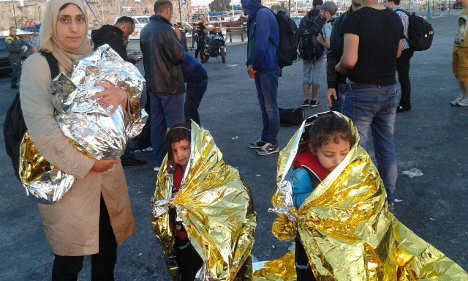 Fatma and her three children after being rescued in Greece. Private photo

“Refugees are very depressed. It is common to see women crying in the camp, to see young men collapsing. It's due to the slowness of the procedure they have to go through,” Fatma Mustafa tells The Local.

Fatma, a 31-year-old Syrian refugee who arrived in Germany in early August, is referring to the German asylum application process which faces the longest backlog in Europe.

But without residency permits the state seems to do nothing for refugees other than house and feed them.

The camp has not organized a single German lesson for her family, the mother of three from Damascus says. Nor have they had any advice on how they can access the job market if their application is granted.

Instead they are moved from camp to camp, making it impossible for her children to settle. In two months they have been rehoused four times.

There is no access to psychological treatment – despite a near-fatal journey from Syria which left Fatma's children suffering nightmares.

At the one camp where she knew of a complaints system it was as good as useless, she says.

'Some take too much, others are left with nothing'

Before fleeing from government bombardment in Syria, Fatma was a school director and hoped that in Germany – the country she set her sights on before she left the Middle East – she would quickly be able to stand on her own two feet.

But while she waits for the cogs of government bureaucracy to grind into gear, Fatma has holed herself up in her camp outside Stuttgart. Rumours of a racist attack on a Syrian man from a neighbouring camp have made her afraid to go outside. The looks she gets on the street are hostile.

The atmosphere inside the camp is little better.

“There is clear tension. The different nationalities hate each other and you can see it in everyday life.”

Lack of proper hygiene only increases tension, as does the chaotic distribution of donations.

“Some people take far more [of the donated clothes and toys] than they need, leaving others with nothing.”

Fatma's brother Khaled, who escaped Syria for Sweden in 2012 and played a role in saving her life as she crossed by boat into Europe, tells the Local that German bureaucracy kills refugees' ambition.

“It is like taking somebody who can walk and making them sit in a wheelchair,” he says. “Especially for Syrians, who are highly educated.”

Khaled's experience in Sweden makes the comparison all the more sour.

“The Swedish system is much more efficient. They help you contribute. After one year I had a job. Now I have my own company.”

That Fatma even arrived in Germany is a small miracle.

In early July she was sitting in a rubber boat in the eastern Mediterranean.

The lights of an unknown Greek island – her hoped-for entry point into Europe – were far away on the horizon. The boat was overcrowded, the engine had stopped working, and the sea was getting ever rougher.

As the boat began to take on water, Fatma sent an SMS to her brother in Sweden. It read: “Help we're sinking. Call the coast guard quickly.”

Khaled could barely sleep. He knew that his siter and her family were on their way to Europe, but until this point he wasn't sure if Fatma – who has a phobia of water – would go through with the dangerous sea crossing.

“When I received the message I freaked out,” he says.

A few minutes later she called him up, pleading with him to help.

“I could hear screaming in the background – my sister was lifting her children up to keep them out of the water,” Khaled recalls.

After trying, and failing, to enlist the help of the Greek coast guard, Khaled called Swedish emergency services who, with the help of the international police, set about tracking down the sinking boat.

“There was panic on the boat,” Fatma recalls the scene. “People were screaming, the little girls were crying – even now they have nightmares about it. And some people were trying to balance the boat to stop more waves getting in.”

Thousands of kilometres away in Sweden, Khaled had no idea whether the boat would be tracked down in time.

“I kept having horrible images of her drowning, of the boat sinking,” he says.

For Fatma the first glimmer of hope came when the Greek coast guard called her phone. They called a further four times, using her phone signal to track down the stricken vessel.

It took less than an hour for the coast guard to find them. But half an hour more, Fatma says, and it would have been too late.

“I started crying with euphoria [when the coast guard arrived]. I felt God had given me a second life. And I knew my children would be safe.”

But this wasn't the only danger Fatma's family faced after they left the bombed out Yarmouk district of Damascus in July.

Near Hama in central Syria they were taken hostage by a militia, which beat her husband until they paid for their release.

After reaching Europe, smugglers packed them into the back of a truck with dozens of other people for two hours, and they were so starved of oxygen that their bodies began to go numb.

Just weeks later, the bodies of 71 people who had been on their way to Germany were found packed into the back of a people smugglers' truck in Austria.

“We left our countries because we were forced to,” Fatma says.

“I don't think the situation in Syria will be solved, even in ten years. I wanted to start a new life and give my children a better future.”

But for Khaled returning home remains a dream, even if a distant one.

“I couldn't go back if [Syrian president Bashar] Assad was still in charge. But of course I would rather go back to where I was born and contribute there,” he says.

“People have to understand that we didn't leave because we wanted to find jobs here. We were faced with two options – either you die there or you try and find safety.”