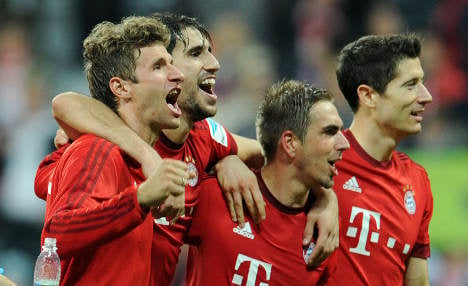 It seems foolish to suggest the German league title race is over with October barely begun, but Bayern's seven-point lead already has an ominous look having won the title by 10, 19 and 25 points respectively in each of the last three seasons.

Pep Guardiola's side are on course to win an unprecedented fourth consecutive Bundesliga title and Dortmund were powerless to prevent their 15-game unbeaten run being ended in emphatic fashion at Munich's Allianz Arena on Sunday.

With just under a quarter of the league season gone, Bayern are in a commanding position in Germany's top flight having thrashed both last season's runners-up Wolfsburg and current deputies Dortmund by the same heavy scoreline.

Third-placed Schalke had earlier slipped to a 3-0 home defeat to Cologne, suggesting they cannot mount a realistic challenge to Bayern over the season.

“It was a big win — seven points clear and the manner of the victory: that was a signal,” said Müller.

“But we have to keep going and keep collecting points after the international break.

“No one is giving us anything, but the mentality of our players is incredible. The hunger is very much there.”

The manner of the win was underlined by the passing quality of Bayern's Germany centre-back Jerome Boateng, who supplied pin-point accurate long balls for Müller's first and Lewandowski's goal.

Head coach Pep Guardiola was delighted as his side picked up their eighth straight league win of the season and their record of 28 goals scored, four against means they have had the best ever start to a Bundesliga season.

“I have to congratulate the players, not just for today, but for the last few months,” said Guardiola.

“We're happy because we won against one of the best sides in Europe.

“We struggled in the first 15 minutes, but our third goal made the difference.

“We scored the first goal despite having very few chances early on, those long balls from Boateng were exceptional.”

Despite the emphatic manner of the victory, Bayern chairman Karl-Heinz Rummenigge is demanding no over-confidence: “We must not be arrogant. Our slogan is: keep calm and carry on.”

Dortmund coach Thomas Tuchel insisted his side had played into Bayern's hands by failing to defend against Boateng's long balls.

“We made life far too easy for Bayern. The opening goal was the worst to concede,” he said.

“A long ball from 40 metres — that shouldn't happen, and it was the same for the third, because you have to close the gap quicker.

“We also gave away a cheap penalty.

“We have to work harder in training now and reset — that's sorely needed.”

Dortmund conceded a penalty when Henrikh Mkhitaryan fouled Thiago in the area and Müller drilled home the spot-kick on 35 minutes to double the hosts' lead.

The visitors fought back on 36 minutes when Pierre-Emerick Aubameyang swept home Gonzalo Castro's superb cross, but it was all Bayern from then on.

Lewandowski made it 3-1 on 46 minutes when he finished off his half-chance after another superb long ball from Boateng.

The floodgates opened when Lewandowski slotted home Götze's great cross on 58 minutes, then the latter hit the back of the net from 12 yards out on 66 minutes.

Tuchel gave a straight answer when asked if any in Germany's top tier can currently rival the Bavarians: “No, of course not, they are just too good playing like this.”