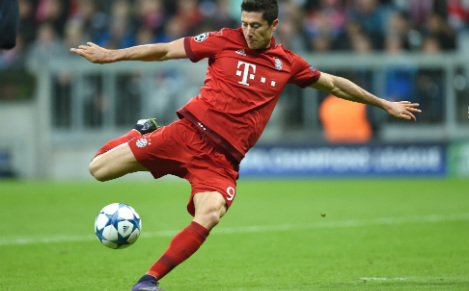 The Poland hot-shot has netted 10 times in his last three games alone and has scored 17 goals for club and country this season.

He backed up his spectacular five goals in just nine minutes for Bayern against Wolfsburg last week with two more in a 3-0 win at Mainz last Saturday in the Bundesliga.

He then bagged a hat-trick in the 5-0 win at home to Dinamo Zagreb on Tuesday in the Champions League.

Bayern-Dortmund matches are billed as 'Der Klassiker' in Germany in a nod to Spain's 'El Clasico' between Barcelona and Real Madrid.

This is the 19th time the teams have met in the last five years and Dortmund lead the series with nine wins, two draws and seven defeats.

Bayern, however, won the match that truly mattered by claiming a 2-1 win at Wembley in the 2013 Champions League final.

The Bavarians won both league meetings last season, but Dortmund took both the German Cup semi-final in Munich last April on penalties and the 2014 German Super Cup title against Bayern.

Dortmund still have their work cut out in their bid to halt Munich's seemingly relentless march to an historic fourth straight Bundesliga title, which no team has done before.

“This is the game everyone in Germany wants to see and we're looking forward to it. As a striker you always want to score more goals, you can never be satisfied,” said Lewandowski.

“It's a summit meeting of the country's best. The whole of Germany's football community will be looking in our direction with great excitement on Sunday,” said Müller.

It seems ridiculous to suggest, but the title race could effectively be as good as over should Bayern finish the weekend seven points clear if they beat Borussia and third-placed Schalke fail to beat Cologne at home.

The Bavarians have won the German league title by at least 10 points in each of the last three seasons and only dropped points after each of their title wins had been confirmed.

Even Dortmund's CEO Hans-Joachim Watzke has said while Borussia can beat Bayern in individual matches, he doubts they can realistically challenge Pep Guardiola's star-studded squad over the season.

“Of course, we have a chance to beat Bayern in selective matches, but over the course of 34 games currently no one in Germany – and probably no one in Europe – could deny this unbelievable quality,” said Watzke.

“We are in good form and on the right path,” said Guardiola.

“We're playing much better, we can play wider and our strikers have more chances.”

Clash of the goal-scoring giants

Bayern prepared for the Dortmund clash by sipping from frothy mugs at Munich's bumper beer festival Oktoberfest on Wednesday. Robert Lewandowski enjoying a litre mug of beer with with Anna at Munich Oktoberfest on Wednesday. Photo: DPA

Dortmund's top scorer Pierre-Emerick Aubameyang also sat out the trip to Greece and a sub-plot of Sunday's clash will pit goal-machine Lewandowski against the man who replaced him in Dortmund.

Between them the pair have scored 19 league goals this season, while Aubameyang has netted in each of Dortmund's seven Bundesliga games.

Before the clash in Munich, third-placed Schalke, who start the weekend a point behind Dortmund, need to beat Cologne at home on Sunday to stay in touch with the leaders.

After their respective midweek Champions League defeats to Manchester City and United, Borussia Moenchengladbach and Wolfsburg clash at Borussia-Park on Saturday.