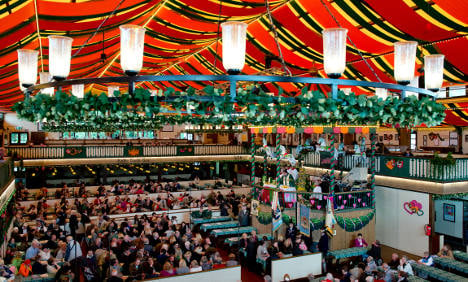 The report by the Taxpayers Association documents how the Bundesnachrichtendienst (BND), Germany's foreign intelligence service, invites colleagues from other countries to Munich's massive piss-up.

At tax payers' expense the foreign spooks are given vouchers for €50 to knock back the famously strong Wiesn beer or tuck into roast oxen. In some circumstances the government even pays for their accommodation.

The revelation is one of several examples the report outlines of the government wasting tax payers' money on frivolous ventures.

Another eye-watering instance of public wastage is a smartphone app which allows users to locate the graves of famous public figures. The app has a poor rating in app stores, but still cost half a million euros to develop.

Largesse on an even more spectacular scale can be found in the north Bavarian town of Regensburg, where the city authorities spent €50 million on a new stadium for their football team SSV Jahn Regensburg – despite the minnows currently struggling in the fourth tier of German football.

In Hamburg, authorities have had to fork up €440,000 on moving a cycle path which was built three years ago so that it no longer upsets pedestrians, but travels along the road instead. Trees, lighting and drainage all had to be moved, accounting for the exorbitant cost.

In Cologne, every time the symphony orchestra play, or even rehearse, the adjacent Heinrich-Böll-Platz is closed off to traffic and pedestrians. Because of poor sound insulation in the building, the sound of voices and young skaters in the square damages the sound quality of the music, authorities say.

Blocking off the square costs an estimated €100,000 per year. As the problem has now not been solved for 15 years, total costs to the tax payer thus far are estimated at over €1.6 million.