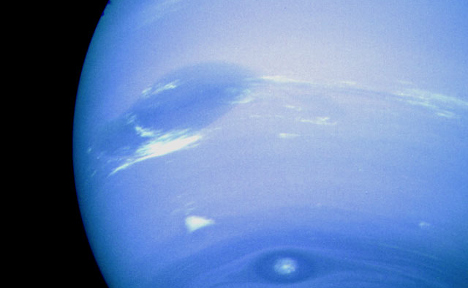 On the night of September 23rd 1846, an astronomer and his assistant were hard at work at the Berlin Observatory.

Le Verrier was convinced that there was an eighth planet in the solar system. Something was amiss with Uranus' orbit – and the previous year, le Verrier had proven that no current theories explained the orbit's irregularities.

Something was interfering with Uranus' orbit, le Verrier concluded – and this something was a planet.

By June he had predicted this planet's location, and on 31st August he presented a memoir to the Académie des Sciences in Paris, detailing the predicted mass and orbit of the planet.

Frustratingly, le Verrier couldn't convince any French astronomers to take up the search for his mystery planet. So he sent his findings to Encke, at the Berlin Observatory.

Encke received the letter on September 23rd. But he had a problem: he was double booked. The Wilhelm Förster Observatory and Planetarium in Berlin. Photo: Wikipedia.

The night of the discovery

Susanne M. Hoffmann is an astronomer at Wilhelm Förster Observatory and Planetarium in Berlin, and director of the planetarium's Astronomical History research committee.

It was Encke's birthday on September 23rd,  she told The Local – and on that evening in 1846, he had to throw a party for numerous important people across Berlin.

Unable to get out of his own birthday party, Encke was forced to pass the job on to his assistant Galle.

“He couldn't do it himself, but he wanted someone at his observatory to do it,” Hoffmann explained.

Encke was more of a mathematician than an observer, Hoffmann said – and this was perhaps the reason he was so comfortable letting Galle take the telescope that evening.

“We don't know for sure, but it seems Encke wasn't so interested in making the observations himself,” she said.

Johann Gottfried Galle had worked as Encke's assistant since 1835. Born in Radis, in Saxony-Anhalt, he studied at the Friedrich-Wilhelms-Universität Berlin from 1830 to 1833, then taught maths and physics before the Berlin Observatory's opening in 1935.

After receiving his orders from Encke, Galle set to work straight away, assisted by Berlin University student Heinrich Louis d'Arrest.

Le Verrier had given instructions as to where Neptune should be – and as fortune would have it, astronomers at the Berlin Observatory had recently made charts of that very area of sky.

When d'Arrest suggested the pair get out these charts and compare them with the sky to seek an orbiting planet, it didn't take Galle long at all to hunt Neptune down.

“Galle knew every dot in that area,” Hoffmann explained, “and he knew this dot didn't belong in the position it was in.”

It was past 11pm by the time Galle began his hunt for the planet – and shortly after midnight on the morning of September 24th, he'd found that dot that didn't fit the charts.

In under an hour, Galle had found an orbiting planet among the stationary stars – less than one degree from where le Verrier had predicted it would be. In the aftermath of Neptune's discovery, arguments broke out as to who truly “found” the planet.

Le Verrier wasn't the only person who had predicted Neptune's existence – in 1845, Cambridge astronomer John Couch Adams also set out to calculate the nature and position of the planet which was disrupting Uranus' orbit.

At first, Adams' predictions were treated as a curiosity, but when British Astronomer Royal George Airy received news of la Verrier's predictions, he realised the two astronomers were probably hunting down the same planet.

James Challis, director of the Cambridge Observatory, was tasked with finding Neptune before la Verrier.

The British search for Neptune began on July 29th – and only after the Berlin discovery on September 23rd did Challis realise that he had actually spotted Neptune already.

Challis had allegedly observed the planet on August 8th and 12th, but because he lacked an up-to-date star map, he hadn't recognised Neptune as a planet.

Despite bitter arguments between the two countries, Adams himself publicly acknowledged the French astronomer's credit in finding the planet.

A first in the history of science

But where did Galle fit into all of this?

“Le Verrier was the calculator who made the right assumption, while Galle was the one pointing the telescope,” said Hoffmann.

Galle's job wasn't easy, either. “It was a masterpiece, identifying the little dot that was Neptune,” she explained.

But le Verrier's remarkable calculations made the discovery on September 24th a true first.

The discovery was also a testament to Berlin's leading astronomical research facilities.

“Berlin was the centre of astronomical observations at the time,” Hoffmann said.

“It was the best observatory in Europe, maybe even the world,” she said, adding “all people turned to Berlin when they wanted observations.”

And the fact that Berlin astronomers had recently charted out that very area of sky was a definite advantage.

“It was the right time and the right place,” Hoffmann concluded.