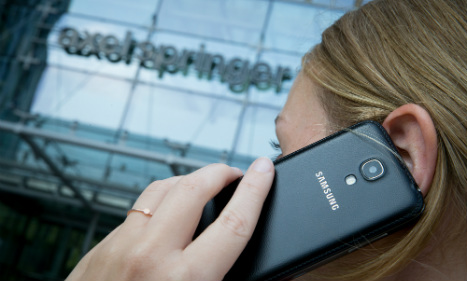 A woman uses a smartphone outside Axel Springer headquarters in Berlin. Photo: DPA

Axel Springer is not a name that obviously leaps to mind when you think of new media.

The publishing house, best known as the owner of long-running German newspapers Die Welt and Bild, has been a familiar landmark on the German media scene since its founding in 1946.

But a report from tech news site Re/code on Monday suggested that the company is planning on expanding its minority stake in BI, the business, celebrity and tech news outlet founded by former Wall Street analyst Henry Blodget in 2009.

“If you look at what Springer has been up to recently, they're trying to extend themselves as a platform” for online news, professor of media economics and innovation at Stuttgart Media University Mike Friedrichsen told The Local.

That would enable the company to move on from its current incarnation as a stable of print publications and survive as the world of news changes.

“Newspapers like Bild are falling away [in popularity] and Springer need to build themselves a second leg to stand on,” Friedrichsen added.

“Business news is becoming more and more of an important factor in the media industry.”

BI would be an obvious complement to Springer's joint venture with US news site Politico, which this year opened a bureau in Brussels to cover European news in-depth.

“I believe the two will be merged,” Friedrichsen said. “Springer is clever enough not to try and divide itself across two markets, but rather to combine – it would make no sense for them to compete against themselves.”

Friedrichsen recalled that in conversations he had had with Axel Springer Executive Vice President Christoph Keese, “if you ask him what the future is like then he uses the word platform. They are betting on that being their business model in the future.”

But simply buying up BI won't be enough to future-proof the publishing house.

“In the next few years, business and economics news will change so much. There is so much free news out there, companies themselves especially are publishing more and more – what is the added value [of journalism] for readers and users?” Friedrichsen asked.

While no one yet has the answer to that decisive question, Springer is likely betting that among the journalists at BI are some of the people who will come up with it in the coming years.

“They have to buy in competence, because they don't have it in-house – neither at Welt nor at Bild,” said Friedrichsen.