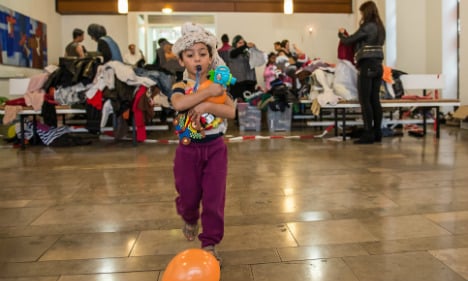 A Syrian child plays as women sort through donated toys and clothes at a church in Stuttgart. Photo: DPA

“I am deeply convinced that what Europe needs is not just selective relocation of this kind, but much more a durable process for fairly distributing refugees among member states,” Merkel told the Bundestag (German parliament), adding: “A first step has been taken, but we are still far from where we should be.”

Merkel's remarks came two days after EU interior ministers forced through a deal to relocate 120,000 refugees in the face of strong opposition from eastern states Hungary, the Czech Republic, Romania and Slovakia.

In what appeared to be criticism targeted against Hungary, Merkel recalled “minimum standards in Europe for the accommodation and care of refugees, and in the asylum-seeking process” and noted that such standards “are not always met at EU borders”.

Hungary has alarmed both human rights activists and the United Nations alike with its army's use of rubber bullets, tear gas and net guns to repel migrants seeking to enter its territory.

Besides sealing off its southern border with Serbia last week, Budapest has also passed a raft of anti-migrant measures, including a law that allows it to jail anyone caught crossing the border illegally.