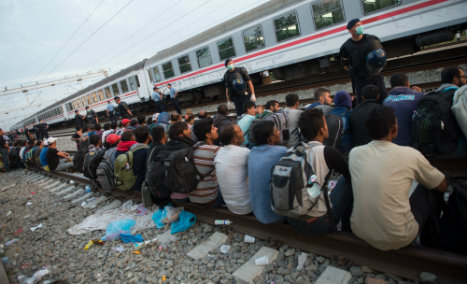 Refugees waiting for a train in Croatia on Saturday. Photo: DPA

Some 5,098 people fleeing war or poverty were reported arriving Sunday in Bavaria state after 1,710 came the previous day, a police spokesman told AFP.

Europe's biggest economy has become the top destination for refugees fleeing wars in Syria and elsewhere, and Berlin has effectively waived EU rules that compel migrants to seek asylum in the first EU country they enter.

Overwhelmed by refugees, and in a bid to better regulate the influx and catch human traffickers, Berlin on September 13 decided to temporarily reintroduce passport checks on its borders, though it still allows the migrants into the country.

Germany may receive one million people seeking refugee status this year, up from the record 800,000 arrivals predicted so far, said Vice Chancellor Sigmar Gabriel a week ago.

Germany remains the preferred destination for the vast majority of Syrians, Afghans or Iraqis that make the gruelling journey to western Europe, said Gerry Voitik, spokesman for the Austrian Red Cross.

“There is an agreement” between the Austrian and German authorities “for up to five special trains per day, plus regular traffic,” he told AFP.

Four special trains were scheduled to cross into Germany on Monday, while between 5,000 and 6,000 migrants were expected to arrive in Austria throughout the day, with most coming from Hungary and several hundred from Slovenia, said Voitik.