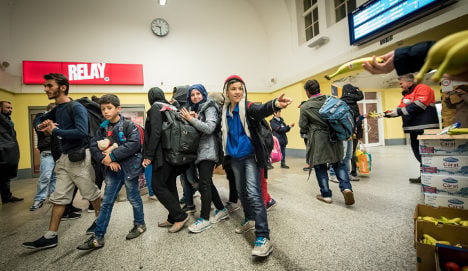 The draft, which has not yet been approved by the council of ministers, aims to discourage asylum-seekers flowing into Germany, which is expecting this year's influx to spike to up to a million migrants from 200,000 last year.

Such a law, if passed, would represent a major reversal on Germany's easing of asylum laws for Syrians.

Europe's biggest economy has become the top destination for people fleeing wars and misery in Syria and elsewhere. Many of them have reached Germany after taking a perilous route through the Balkans and central Europe.

Conservative De Maiziere wants the so-called Dublin Regulation, which normally requires people to make their asylum claims in the first EU country they enter, to be enforced again after Germany said in August it would no longer apply to Syrians.

If his draft is approved, it could leave dozens of thousands of people who have reached Germany in recent weeks out in the cold.

It would also leave migrants who are refused asylum but who cannot be deported to their home countries under German law with neither the right to work nor the right to social benefits, putting them in an impossible situation.

In a separate development, the head of Germany's Office for Migration and Refugees, Manfred Schmidt, resigned Thursday, citing “personal reasons”.

The office had repeatedly come in for criticism amid a huge backlog in handling a record wave of asylum requests as Europe faces its worst migration crisis since World War II.

Foreign Minister Frank-Walter Steinmeier has threatened to push through a resolution on distributing refugees across the EU against the will of eastern European member states.

Speaking to the Passauer Neue Presse on Friday, Steinmeier said that Germany was prepared to use a majority vote to push through the establishment of a quota system for refugees.

Next Wednesday European leaders will come together in Brussels for an emergency summit to discuss ways of dealing with a refugee crisis in which hundreds of thousands of people have entered the union from the Middle East and Africa this year.

“If there is no other way, we should seriously consider using the instrument of a majority-based decision,” Steinmeier said – threatening to deploy the rarely-used “qualified majority” rule to force a quota system through rather than pushing for a unanimous decision.

The 28 EU members usually aim for compromise and consensus on policies, but under the tool of a qualified majority vote, binding decisions can be taken if 55 percent of nations representing 65 percent of the total population agree.

The threat comes after a meeting of EU interior ministers in Brussels on Monday failed to reached consensus on dividing up 120,000 refugees across the 28-member union.

The eastern European states of Hungary, Poland, the Czech Republic and Slovakia are most strongly opposed to the quota system.