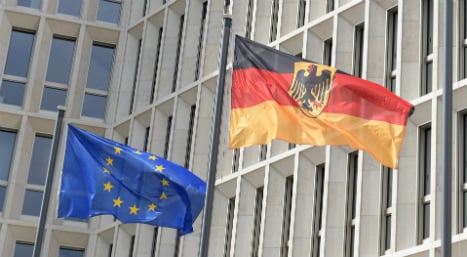 EU and German flags outside the Interior Ministry. Photo: DPA

Tusk made the announcement through Twitter and set the date for Wednesday 23rd of September at 6 pm.

The ex-Polish premier consented to a demand made by Chancellor Angela Merkel after a meeting of EU interior ministers on Monday failed to reach an agreement on relocating 120,000 around EU member states.

On Tuesday Merkel called for a special summit saying “it is a problem for the entire European Union and therefore we argued for a special EU summit to be held next week. Donald Tusk will look into that.”

At the meeting on Monday in Brussels ministers could only agree on quotas for a more modest relocation of 40,000 refugees from Italy and Greece which was proposed in May.

Germany had reacted to the failure furiously with vice-Chancellor Sigmar Gabriel saying Europe had disgraced itself, while Interior Minister Thomas de Maizière threatened financial punishment against the eastern European states who had blocked a resolution.