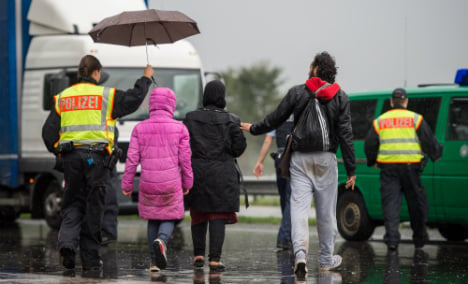 Police on the A8 motorway in Bavaria escort a Syrian family off the road. Photo: DPA

“The situation in Serbia and Hungary could lead to more people smugglers appearing” on the Czech border, a federal police spokesman said on Thursday in Pirna, southeast of Dresden.

Police started checking traffic on the Autobahn 17 motorway on Wednesday and were unable to say on Thursday how long they would continue.

But officers are prepared to settle in for a long deployment on the road.

The majority of refugees arriving in Germany continue to first enter the Federal Republic through Bavaria.

Saxony has already set up border controls on the Czech frontier at Oberwiesenthal and Marienberg.

There are currently no plans for police to be deployed on the Autobahn 4 leading over the border to Poland, federal police said.