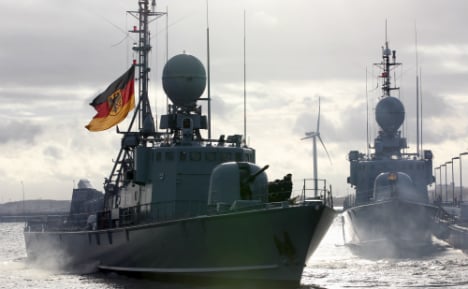 “The government today decided on the participation of German armed forces in a new phase of the EU-led Operation EUNAVFOR MED,” said Merkel's spokesman Georg Streiter.

Pending parliamentary approval, up to 950 armed German military personnel will join operations to rescue migrants on the high seas and confiscate traffickers' vessels, the cabinet decided.

The mission will focus on areas south of the Italian island of Sicily and off Libya and Tunisia, but outside the territorial waters of Libya, the main departure country for the often rickety vessels.

More than 430,000 people have crossed the Mediterranean to Europe so far this year, while 2,748 have died at sea, according to the International Organization for Migration.

In the ongoing first phase of the EU operation in the Mediterranean, Germany's Bundeswehr defence forces have rescued 7,200 people since May and taken them to Italy, while also gathering information on trafficking networks.

About 320 German military personnel have joined the patrols aboard the frigate “Schleswig-Holstein” and the supply ship “Werra”.

The patrols will now also be tasked with stopping and seizing suspicious vessels and passing on information about suspected human smugglers to law enforcement agencies.

In an upcoming third phase of the EU mission, traffickers' ships will be destroyed, said a government statement.

“If one were hypothetically to go in with ground troops – which we don't want to – one would always end up fighting the wrong people,” von der Leyen said on ZDF television on Wednesday morning.

Given the large number of parties to the conflict in Syria, von der Leyen said that the only possible solution was a diplomatic one.

The United Nations must decide which groups inside Syria were deserving of international support, she added.

And she said that “there is no upper limit” to the number of soldiers she could make available inside Germany to help with the logistical effort to support the large numbers of refugees arriving.