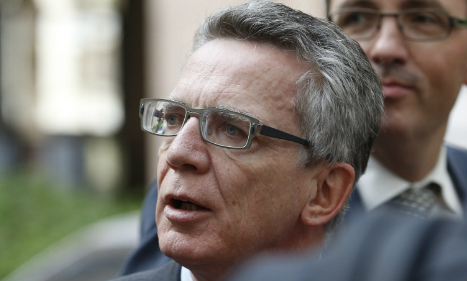 Interior Minister Thomas de Maizière will be pushing for other EU nations to take on more refugees at a Brussels meeting on Monday evening. Photo: DPA

Facing the biggest refugee crisis since the Second World War, ministers from EU member states are gathering to try to heal deep divisions in the bloc over migrant policy.

They are expected to announce what the Union's next move will be in a press conference on Monday evening.

The meeting comes after Germany – which is expecting 800,000 migrants this year – revealed it could no longer cope with the record influx in a shock decision on Sunday to reintroduce border controls.

Europe's top economy had previously signalled it would throw open the country's borders to Syrian refugees but ministers explained that regions could no longer cope with the rising number of arrivals.

Some observers have suggested that the move was intended to put pressure on other EU nations before Monday's crisis talks, as it will shift a heavier share of the refugee load back onto countries with external frontiers like Hungary, Greece and Italy.

A European Commission plan to share out refugees according to binding quotas with support from both German and Sweden – the two countries that have proven the most popular destinations for refugees – ran into stiff opposition from several Eastern European states such as the Czech Republic and Slovakia.

A leaked draft of the communique to be presented at the interior ministers' meeting on Monday seen by the Financial Times put forward a lower figure of 120,000 refugees to be shared out among EU member states.

But the statement uses evasive language to avoid binding the ministers to a set quota for each country.

A key clause reads only that “work will be carried out as a matter of priority on the preparation of a formal decision to implement this, with due regard to the flexibility that could be needed by Members States in the implementation of the decision, in particular to accommodate unforeseen developments.”

And while there are sections promising aid to both Greece and Italy, two of the biggest frontline nations in the refugee crisis, there is no mention of extra help for Hungary.

That might be retaliation for the belligerence of Hungarian Prime Minister Viktor Orban against neighbours over the refugee crisis in recent weeks.

Chancellor Angela Merkel's dramatic reinstatement of checks on Germany's frontiers has marked a new phase in the continent's migrant crisis and struck at the heart of the EU's cherished Schengen agreement, which allows border-free travel throughout most of the bloc.

Despite protestations from Merkel's spokesman that Germany “isn't slamming the door” on refugees, right-wing critics have said that her previous open-door policy was ill-thought-through, while left-wingers are furious that she has gone back on a declaration two weeks ago that “we can manage this”.

Merkel “is not shutting the door, she is re-introducing checks to ensure that those who enter Germany have the status of refugees and that the countries up the chain have respected the rules of Schengen”, Interior Minister Bernard Cazeneuve told RTL radio.

Threat to Schengen is threat to EU values

The German Chancellor, whose country expects to receive at least 800,000 asylum seekers this year, bluntly warned last week that the passport-free Schengen zone of 26 countries was under threat if the EU failed to work together on coping with the inflow.

“If Europe fails the refugee question, then a decisive founding impulse for a united Europe will be lost,” Merkel told MPs in the Bundestag (German parliament) on Wednesday, “namely the close connection with universal human rights that has defined Europe from the beginning and must remain valid in the future.”

Britain, which is not part of the zone, on Monday appointed a minister to deal specifically with the 20,000 Syrian refugees the country has agreed to resettle over the next five years from camps bordering the war-torn country.

The International Organization for Migration has said that more than 430,000 people have crossed the Mediterranean to Europe this year, with 2,748 dying en route or going missing.

Official forecasts suggest Germany will receive around 800,00 refugees in 2015 – although Vice-Chancellor Sigmar Gabriel suggested that the real figure might be as high as one million in comments on Monday.