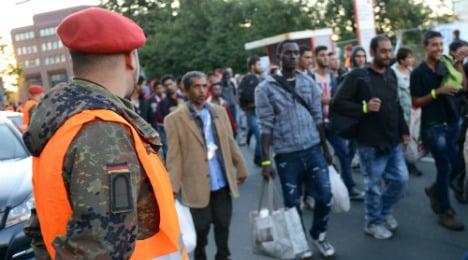 “Germany expects 40,000 new migrants from the south at the weekend. Despite the willingness of German people our possibilities are smaller and smaller,” Foreign Minister Frank-Walter Steinmeier told counterparts from the Czech Republic, Hungary, Slovakia and Poland at a meeting in Prague on Friday.

Europe's largest refugee crisis since the end of the Second World War could be “the biggest challenge for the EU in its history,” Steinmeier added at crisis talks with the countries that have pushed back against mandatory refugee quotas imposed by the European Commission.

“If we are united in describing the situation as such, we should be united that such a challenge is not manageable for a single country,” he said, adding “we need European solidarity.”

And German Defence Minister Ursula von der Leyen told Der Spiegel on Friday that she was placing 4,000 soldiers on alert to help with the expected fresh wave of arrivals at the weekend.

“The country can be sure that the Bundeswehr [German army] will be supporting” efforts to care for refugees, Von der Leyen said, adding that the army could do yet more if called upon.

“We are spreading these 4,000 soldiers across the country and they will intervene if the federal states [which are responsible for the initial uptake of refugees] request it,” a Defence Ministry spokesman told The Local.

“They will provide a helping hand, for example to set up a refugee camp, to help with organization, provide buses and drivers, other types of transport, medical services and equipment, anything of that kind.”

Record numbers of people, many of them fleeing war and conflict in Syria and Iraq, continued to pour into Europe, with around 7,600 entering Macedonia in the last 12 hours.

But the eastern EU members stuck to their rejection of compulsory quotas for migrants proposed earlier this week by the European Commission.

“We're convinced that as countries we should keep control over the number of those we are able to accept and then offer them support,” Czech Foreign Minister Lubomir Zaoralek told reporters in Prague.

As it struggles to cope with its own massive influx of refugees and migrants from Balkan states, Hungary on Friday offered to host talks with its southern non-EU neighbours like Serbia or Macedonia.

“Budapest will be happy to host a conference that will tackle the cooperation between western countries and western Balkan countries,” Hungary's Foreign Minister Peter Szijjarto said.

He also revealed that as of next week his country would prosecute anyone damaging border infrastructure, in comments that came amid an outcry over disturbing footage of refugees in Hungary being fed “like animals” at a migrant holding centre.

“As of next week, we will have a rule under which those who illegally enter Hungary by damaging infrastructure protecting the border will commit a crime and face prison or extradition,” Szijjarto said at a joint press conference with his Czech, Polish and Slovak counterparts.