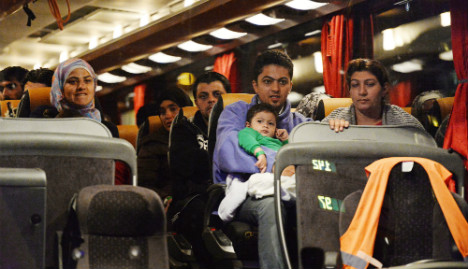 Refugees wait in a bus at Munich main station to be taken to emergency accommodation. Photo: DPA

Public broadcaster ARD found that 61 percent of people disagreed with the statement “It scares me that so many refugees are coming to us” in its regular Deutschlandtrend survey.

That meant more people were unafraid of refugees than when the question was asked last week, when 59 percent said the large numbers arriving didn't scare them.

Meanwhile, respondents to a ZDF Politbarometer poll said they agreed with the decision to give refuge to asylum-seekers stranded in Hungary, while only 29 percent were opposed.

An overwhelming 85 percent also believe that even more refugees will head to Germany, the ZDF survey found.

Nevertheless, 62 percent of those polled believed Germany can cope with the surge in refugees, while only 35 percent disagreed.

And 43 percent approved of Merkel's grand coalition's plans to pump an extra six billion euros into the refugee relief effort. One in four even wanted more funds unlocked, against 22 percent who wanted the sum slashed.

There were slight differences between west and east Germany in how people felt about refugees and migration.

More people in the states making up the former German Democratic Republic (DDR) agreed that refugees made them afraid at 43 percent, compared to 36 percent in the West.

Meanwhile 81 percent of respondents in the Deutschlandtrend survey said that their everyday lives had not been changed at all by immigration.

Seventeen percent said there had been small changes and just two percent thought change caused by immigration had been far-reaching.

One in five Germans already helping

A third poll by YouGov showed on Thursday that 18 percent of the 1,200 people surveyed, or around one in five, had already done something to help refugees.

Meanwhile 23 percent said they had “concrete” plans to help, while 59 percent had no plans at all.

Eighty-three percent of people agreed that those fleeing war or oppression should have the right to asylum in other countries – and just eight percent disagreed with this idea.

But only a minority thought Germany had a special responsibility to help because of its dark past, at 26 percent.

Conservatives push back at Merkel

Despite the popular backing, the government's welcoming attitude to refugees has sparked discord within Merkel's conservative camp of CDU Christian Democrats and their CSU Bavarian allies.

CSU vice president Hans-Peter Friedrich called Merkel's decision “an unprecedented political error” that would have “catastrophic consequences”, according to a report published Friday in the Passauer Neue Presse daily.

“We have lost control,” he said, warning that it was “completely irresponsible to allow thousands of people to enter without controlling and registering them, and one can't really estimate how many IS fighters or Islamists are among them.”