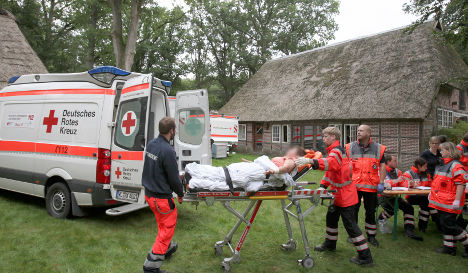 The German media have dubbed the puzzling incident “the collective trip of Handeloh”.

On Friday emergency services were called to a conference centre in the north German town of Handeloh, where a group of homeopaths who were attending a seminar had begun to act in a rather odd way.

According to witnesses at the scene, the practitioners of herbal medicine were rolling around on the grass in front of the centre, talking gibberish and complaining of pains in their stomachs.

When emergency services arrived at the scene, it seemed that they were strongly hallucinating and had completely lost connection to reality, reports broadcaster NDR.

Authorities are working under the assumption that the group took the party drug 2CE, also known as Aquarust and banned in Germany since 2014. But they appear to have taken it in an extremely high dose.

By Tuesday, all 29 of the homeopaths who were taken into care had recovered enough from the effects of the drug for police to assess them as fit for questioning.

Police are still trying to determine the circumstances under which the homeopaths took the hallucinogen and whether it was done consciously.

While consuming the drug is not a criminal offence, providing it to people is punishable by law in Germany.