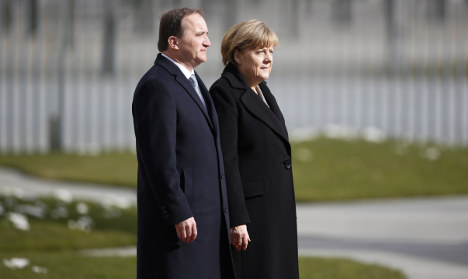 Stefan Löfven and Angela Merkel at a previous meeting in February. Photo: TT/AP/Markus Schrieber
Sweden's Social Democrat leader told a press conference on Monday that his country remained united with Germany in pushing for a quota system which would force all EU countries to take in a number of refugees proportional to their size and economic health.
"Sweden and Germany are the countries in the EU that take in the largest share of refugees and advocate a common system of binding quotas, which all EU countries must follow," he said.
While asylum seekers generally enter Europe through Greece and Italy, nearly half of all asylum requests in 2014 were presented in Germany and Sweden. Efforts by the European Commission to make it mandatory for other countries to accept more refugees have so far failed.
READ ALSO: 'It was a long journey and some of my friends died'
Speaking ahead of discussions with German Chancellor Angela Merkel in Berlin on Tuesday, Löfven reiterated concerns raised during his keynote speech at a 'Refugees Welcome' rally in Stockholm on Sunday. He said that some EU countries were failing to do enough to help, despite a shift in mood in other parts of Europe in recent weeks.
"I am hopeful when I hear more and more leaders say that they want to take responsibility," he told Swedish reporters.
"But I am also concerned. There are also countries that shirk their responsibility. Hungary is one of them," he added.
"All countries in the union must now decisively stand up for human dignity and do their duty at this challenging time." Sweden's Prime Minister Stefan Löfven holding a press conference on Monday. Photo: Bertil Ericsson/TT
READ ALSO: Thousands join 'Refugees Welcome' rally
Löfven is pushing for all 28 member states to receive 100,000 refugees, five times the figure of 20,000 discussed by leaders earlier this summer.
He has also said that his government will set aside more money for municipal authorities in Sweden in its autumn budget, to help them resettle new arrivals from Syria and other war-torn nations.
The talks between the Merkel and Löfven are set to take place at 1pm on Tuesday and will be followed by a joint press conference.