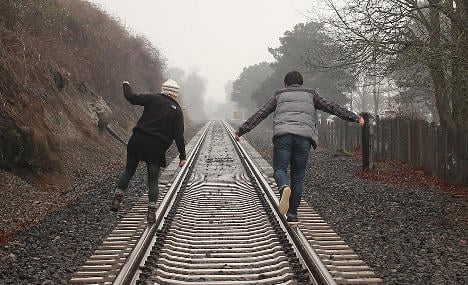 More and more young people are finding their way onto Intercity train lines, balancing hand-in-hand on the tracks and photographing themselves with their smartphones, the Mittledeutsche Zeitung (MZ) reports.

This dangerous new hobby is particularly popular among teenage girls, and signifies courage, the unbreakable bond of their friendship and Fernweh (the longing to travel), the MZ adds.

Police in Saxony-Anhalt said on Sunday they had already caught teenagers taking photos of themselves on train tracks in the east German state on six occasions this year.

And searches for simple terms on Instagram such as “Gleis” (German for “train track”) turns up large numbers of such photos.

“The photography takes up their complete attention and they lose awareness of what is going on around them,” a police spokesperson told MZ. “They trust in their friends seeing or hearing the danger, but even on a calm day you hear modern trains too late.”

A train that is travelling at a speed of 160 km/h covers a distance of 100 meters in 2.25 seconds, making getting out of the way extremely difficult.

Four young girls have already paid with their lives for taking part in this trend in recent years, two in Baden-Württemberg and two in North Rhine-Westphalia. All of them were aged 16 or under.

At the end of August a 16-year-old from Haale in Saxony-Anhalt was struck by a locomotive while walking along the tracks between two platforms at the towns' main station.

The train driver had tried to warn the teenager of the impending collision by blasting his horn but the young man didn't hear the warning signal over the music he was listening to through his headphones.

He was struck in the shoulder and had to be taken to hospital.

Similarly, in February a 21-year-old was killed in Saxony-Anhalt while out running. He crossed a train track wearing headphones and did not see an Intercity train approaching, which fatally struck him.

Police have taken measures to counteract the carelessness of young people around trains, including distributing flyers and sending officers to schools to advise about the dangers, the police spokesperson said.