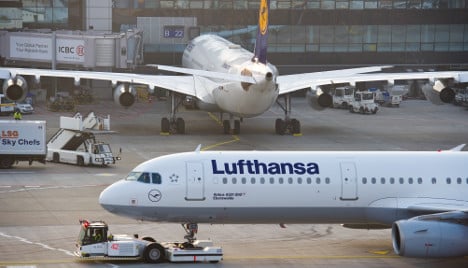 Walkouts could affect Lufthansa passenger flights as well as Lufthansa Cargo and the Germanwings low-cost subsidiary.

“It's become clear that the [Lufthansa] board isn't striving to find mutual solutions,” VC spokesman Markus Wahl said in a statement.

Wahl accused Lufthansa bosses of turning down a €500 million offer to reduce costs from the union which they described as an “alliance for growth and employment”.

“We regret that the VC pilots' union has again abandoned the constructive negotiation approach,” a Lufthansa spokeswoman said in an emailed statement.

The company had proposed a timetable for preliminary talks aimed at getting top negotiators back around a table to discuss the pilots' labour conditions, she said.

“Lufthansa has not in any way rejected the proposals submitted by VC, but regards these as a sound foundation for constructive talks,” she added.

“The threat of further strike action… only hurts our customers, our company and all our personnel. And it only benefits our competitors,” the statement concluded.

Battle over pay and retirement

Cockpit has been engaged in a battle with Lufthansa for many months over pay and retirement conditions for its pilots, especially those in the airline's lower-cost subsidiaries such as Germanwings.

One major point of contention is registering aircraft and their crews in foreign countries so as to avoid paying the same levels of salaries, social security and pension contributions as would be the norm in Germany.

“Registering abroad is exactly the opposite of an alliance for growth and employment,” Wahl said.

Pilots voluntarily swore off industrial action in late March after the fatal Germanwings crash in the French Alps.

But the issues that motivated the last strike at Lufthansa, including early retirement arrangements for pilots, are still unresolved and could see a fresh wave of walkouts this autumn – further exasperating shareholders at Europe's largest airline.

The pilots' last strike in March was the 12th in a battle that has been raging since April 2014.

SEE ALSO: Lufthansa services 'back to normal' as strike ends