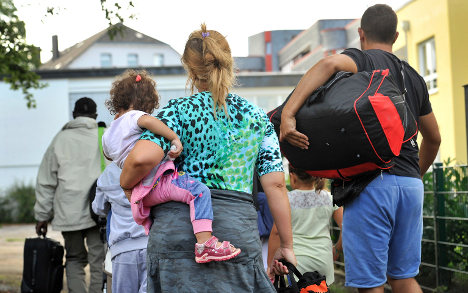 The comments from Manfred Schmidt, head of the Federal Office for Migration and Refugees (BAMF) are certain to provoke anger in some quarters of the political spectrum.

Schmidt told Der Spiegel he was “convinced” that Germany and its citizens were prepared for the task that is entailed by taking so many people into the country.

“There is an enormous engagement on the part of the German people. On the one hand you have Heidenau – but in reaction to that you can fill 100 or 200 volunteer positions,” he said.

Heidenau, a town in Saxony, was the scene of violent far-right protests in front of a planned refugee centre earlier in August.

Schmidt made clear that the number of refugees Germany takes in will remain dependent on external conditions and not on quotas set in Berlin.

“There can be no upper limit set on the intake of people who are fleeing persecution and need protection,” Schmidt said.

With Germany expecting 800,000 asylum applications during the course of 2015, Schmidt has had more work on his desk than in any previous year, and the backlog in applications is now estimated at a quarter of a million.

But the ex-jurist said that the opening of extra offices and the building up of his workforce would soon start to make a difference.

“There will be new processing centres set up in several cities and thousands of new employees will be hired this year – and in 2016 we will add up to 1,000 more people to our workforce. This is already making a difference. Up to July we processed more applications than in the whole of 2014,“ said Schmidt.

He also argued that changes to the process would have an impact in halting the influx of migrants from so-called 'safe countries' in the Balkans.

Defending a decision to stop providing asylum seekers with money, but to instead give them with coupons, Schmidt said that the money Balkan families were given here over the few months it takes to process an asylum application was often used to live “for up to a year” back in their home countries.

Schmidt explained the huge rise in the number of people seeking asylum in Germany as primarily due to Syrian refugees finally giving up hope that they will be able to return to their homes in the near future.

But he also said that advances in telecommunications meant that people in Africa were much better informed than a decade ago as to the economic strength of the Federal Republic. This made it an attractive place for people to migrate to who couldn't envisage a future for themselves in their own country, he argued.

“We need to communicate to these people that using the asylum system isn't the right way to come to Germany, we should also be working in their countries to show that there are legal ways to migrate here for work,” said the BAMF head.