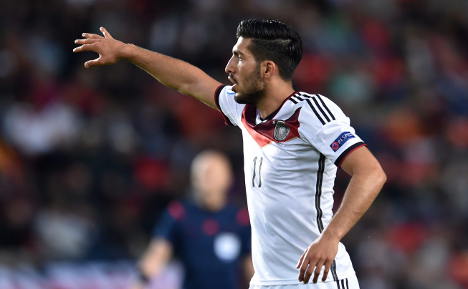 Liverpool's Emre can has been called up to the Germany squad to face Scotland and Poland. Photo: DPA

Germany host Group D leaders Poland in Frankfurt next Friday, with the Germans just one point behind in the table, then face third-placed Scotland in Glasgow on September 7.

Although a centre-back at Liverpool, Can has been called up to compete for the right-back berth in Germany coach Joachim Löw's search to fill the position after ex-captain Philipp Lahm retired after last year's World Cup.

Can is the only uncapped player in the squad, which will be captained by Bastian Schweinsteiger for the first time since his transfer to Manchester United from Bayern Munich last month.

“Emre has developed well in Liverpool, he is flexible and has impressed us with his dynamic play. Now we want to get to know him better in the next few days,” explained Löw.

Bayern's Manuel Neuer remains Löw's first-choice, but Barcelona's Marc-Andre ter Stegen has been called up at the expense of Dortmund veteran Roman Weidenfeller.

The top two teams in each group qualify directly for Euro 2016 in France and Löw says the Germans must take the chance to go top by avenging their 2-0 defeat to Poland in Warsaw last October.

After winning the 2014 World Cup, Germany suffered a post-Brazil hangover as they struggled to a 2-1 win over Scotland in Dortmund, lost away to Poland, then leaked a late equaliser in their 1-1 home draw with Ireland.

“We still have things in our own hands, we want to meet our high expectations and take over the lead at the top of the table,” said Löw.

“Our goal is simply to win the next two games and I assume we'll succeed.

“We gave away a few points at the start of the qualifying process, but there were reasons for that.

“We know what's at stake and we want to shift up a gear. We're ready.”