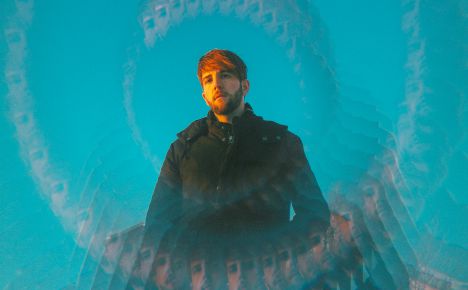 “Humiliation is nine-tenths of entertainment. So, it’s really OK to get up on stage and embarrass yourself. It’s kind of better than boring people.”

That’s what Owen Pallett told The Local about his recent performance at Berghain for the music and art festival Pop-Kultur.

The Canadian composer and pop violinist premiered mainly untried, new songs he’s working on for his next album.

But there’s nothing Owen Pallett has to be musically embarrassed about.

His records are critically praised. He’s worked for the likes of The National and Taylor Swift. And he received an Oscar nomination for helping score the Spike Jonze film, Her.

The same goes for his performance on Wednesday night.

With the help of stargaze, the inventive Berlin-based classical music collective, Pallett’s falsetto vocals and chamber pop sounds – a mixture of pop and electronic with classical music – had the crowd focused on nothing but the stage.

When the show was over and the applause wouldn’t stop, he had to return to the mic and admit they hadn’t rehearsed any extra songs, so there was nothing left for an encore.

His stop in Berlin is just one of many these last two years.

Pallett has been touring the entire time, first with the internationally-loved Arcade Fire and for his latest solo album, In Conflict.

As someone who has visited numerous cities in such a short time span, we asked the classically trained musician what makes a city creative.

“Any creative city is going to be defined by an affordability of housing,” he said.

“Basically artists are just big babies and so they kind of need the space and to be able to do it for cheap.”

Housing affordability is certainly a conversation Berlin is having, with the new “rent brake” introduced in June meant to curb rising costs of living.

“I’m feeling more and more that Berlin is kind of a bit of a weird city because I feel like artists need to live in smaller cities. They need to live in places that are less than 1 million people…Small cities are better for artists. Mostly it’s just the affordability.”

He thinks many artists, particularly North American artists, are attracted to Berlin partly because it feels “a little like home, except with Germans.”

And could the city with – probably – the largest numbers of creatives per square foot in the world tempt Pallett to stick around?

“Any sort of glamour of travelling basically wore off after the first tour…I’m really about gardening and mowing my lawn these days,” Pallett said.

“That’s what I want to inspire me creatively.”