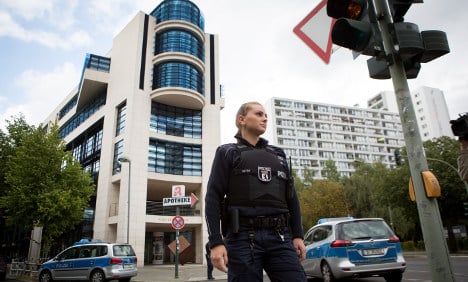 A police officer standing outside the SPD's Willy-Brandt-Haus headquarters during the evacuation. Photo: DPA

“The Willy Brandt Haus has been evacuated because of a bomb threat,” tabloid Bild tweeted on Tuesday.

But by around 4:40pm, workers were back inside the party HQ.

Police told Moritz Rödle of public broadcaster ARD that the threat was “not serious” but were unable to comment on its origin.

Speaking just after the evacuation, SPD general secretary Yasmin Fahimi said that the party had received a bomb threat at 3pm and immediately ordered all its workers out of the building.

“Since [Vice-Chancellor and SPD leader] Sigmar Gabriel's visit to Heidenau, there have been a flood of threats reaching the Willy Brandt Haus combined with xenophobic hate speech,” she said.

“We have to assume that this is a purely political act.”

Fahimi added that the SPD would not change its position on anti-refugee protests that have shaken the country in recent days.

Gabriel condemned demonstrators who fought with police over the opening of a refugee home in the Saxon town of Heidenau last weekend as “vermin” and called for them all to be punished harshly for their actions.

The Berliner Zeitung reported that there had been a second bomb threat against the State Office for Health and Social Affairs in Berlin.

The Vice Chancellor visited the town on Monday, prompting a flood of hundreds of items of hate mail, phone calls and email to the Willy Brandt Haus.

“Our colleagues, politicians and the SPD have been insulted, threatened and cursed, had hatred and provocations against refugees poured over us,” Fahimi had said earlier on Tuesday.

Before the bomb threat, the party said it had received around 300 emails and 150 phone calls with “inhuman” content, and was already considering legal action in 14 cases.

“We will bring the smallest suspicion of criminally relevant content to legal action.”