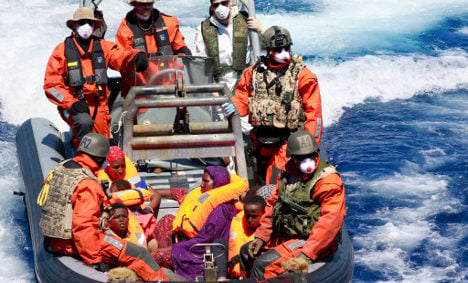 German soldiers from the frigate Schleswig-Holstein with refugees from Somalia in the Mediterranean on Sunday. Photo: DPA

“Never before have so many people fled political persecution and war as today, many of whom seek refuge here with us in Europe,” the two Social Democratic Party (SPD) politicians wrote in an article detailing the plan.

“The political framework for action has long since ceased to be national,” they continue.

“Only together and only at the European level will we be able to find rational solutions…refugee and migration policy is currently the most important policy field in which we must further the project of European integration with dynamism and conviction.”

“Germany stands ready to do its utmost.”

1. Create humane conditions for refugees across the EU

5. Assist countries taking the brunt of the strain

6. Stop loss of life in the Mediterranean

7. Deport those whose asylum applications are denied

9. A new immigration law for Germany

10. Fight the causes of flight in the Middle East and Africa

Point three of the plan, which calls for “fair distribution of refugees in Europe”, is likely to be welcomed in Germany but resisted in other countries like the UK and newer eastern member states.

“The citizens of our countries are helping to receive and integrate refugees into our society as never before,” Steinmeier and Gabriel wrote.

“This solidarity will only be maintained long-term if people see that the refugee crisis is being approached fairly throughout Europe.”

Germany's eighth action point would mean finding an EU-wide agreement on which countries to designate “safe countries of origin,” especially in the Balkans

“The countries of the western Balkans aim to join the EU, and we have good cause to extend to them the prospect of accession… By the same token, we cannot treat them as persecuting countries,” Gabriel and Steinmeier wrote.

In recent weeks, politicians in Germany have argued that countries in the Balkans should be given this designation so as to ease the burden on asylum processing bureaucrats and speed things up for those most in need.

But opponents argue that a blanket classification for the Balkans would ignore the plight of Sinti and Roma people there.

Other contentious parts of the plan are likely to include increasing aid to the countries most under strain in the refugee crisis – especially Greece and Italy.

“Germany is the only EU country to have made available emergency funds to improve the situation of refugees on the Greek islands,” Gabriel and Steinmeier noted.

But Germany itself needs cash to make sure that struggling local authorities can cope with the unprecedented numbers of people in need arriving, they add.

Germany: all Syrians can apply for asylum

In a separate development, reports emerged on Monday that Germany's Federal Office for Migration and Refugees (BAMF) had instructed its workers to stop applying the EU's 'Dublin rules' to Syrian refugees.

Normally under the Dublin agreement, refugees are supposed to be removed to the country where they first entered the Union for asylum processing if they have managed to reach a different country – meaning that under the letter of the law, most Syrians should be processed in Greece or Italy.

BAMF spokesman Johannes Dimroth told The Local that “at the present time, Dublin proceedings for Syrian citizens are in practice not being pursued.

Between January and June, only 131 refugees have been transferred to other countries under the Dublin rules, he said.

“This is a guideline from the BAMF, not a legally binding decision. The BAMF has already examined the question of whether there were humanitarian reasons to take over the asylum proceedings in Germany.”

Dimroth explained that it was up to individual member states whether to invoke the Dublin rules to try and have asylum seekers removed to the country where they first entered the EU.

“This is a way of speeding up the process, avoiding decisions and appeals, sending off to their original country of entry for documents and so on,” he said.

On Sunday, German frigate Schleswig-Holstein took on board 453 refugees from a British navy ship in the Mediterranean.
Among those rescued at sea were 83 women and 24 children. However, by Monday morning, the number of passengers had risen.
On  Tuesday, the German Navy announced that for the first time ever, a baby girl had been born at sea onboard the German Navy ship.
Somalian refugee Rahma A. gave birth to a healthy baby girl on board  in the early hours of Monday morning
The 33-year-old from Mogadishu, who had been travelling alone for five months before giving birth, was one of 4,000 refugees rescued by various deployments in the Mediterannean at the weekend.
She will be treated in hospital once the Schleswig-Holstein docks in Italy. Her baby girl, named Sophia, is reportedly strong and healthy.