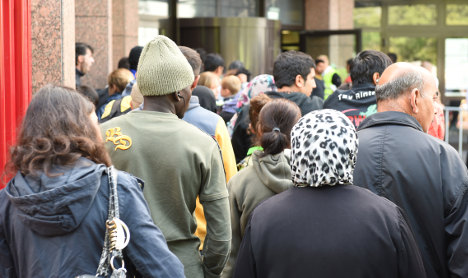 “This number is a real challenge,” de Maizière said at a a press conference announcing the new projections on Wednesday, adding that “Germany is not overwhelmed by this development.”

“We need to find different, faster and more pragmatic ways to take action.”

The Ministry for Immigration and Refugees (BAMF) had previously forecasted a total of 450,000 for this year.

In total, 200,000 people last year sought asylum for the first time in Germany.

The projections for this year are set to break the previous record of asylum seekers in the country of 440,000 in 1992.

Officials expect more immigrants to come in the second half of the year than in the first, many from the Aegean Sea and the Balkan Peninsula.

De Maizière reiterated at the press conference that the high proportion of people coming from the Balkan region – 40 percent – is “unacceptable” as there are others fleeing countries where they are in greater need or face worse violence and persecution.

The rising tide of immigrants seeking asylum in Germany has stirred up heated debate throughout the country, with many state and municipal leaders calling for more aid.

“The government must now say as soon as possible how it is going to contribute towards the long-term and structural costs of caring for refugees,” North-Rhine Westphalia minister-president Hannelore Kraft told Spiegel Online.

“We don’t have the time to still be discussing this for months.”

De Maizière has said that the government should review the amount of benefits immigrants receive when they apply for asylum.

Some have pointed out that the amount asylum-seekers legally receive in benefits is equal to a police officer's salary in Kosovo or Albania.

Germany receives by far the greatest number of asylum-seekers in the EU and has seen dozens of attacks against refugee and asylum homes amid the influx of refugees, especially in far-right strongholds.

A home for asylum-seekers was set on fire in April in Tröglitz in Sachsen-Anhalt, destroying the roof of the building.

While also condemning attacks on refugees, Chancellor Angela Merkel said in an interview last weekend that the immigration crisis would be a bigger challenge for Europe than Greece’s struggles.

In his speech on Wednesday, De Maizière also called on the EU to band together to address the immigration issue.

“There is not any one measure that will solve this, we must test all possibilities,” he said. “It is time for a European solution.”

A quota system to redistribute refugees, pushed by Merkel, has met with opposition from some member states.

The UN High Commissioner for Refugees said on Tuesday that Europe must work out a fairer way of sharing refugees rather than placing most of the burden on the shoulders of Germany and Sweden, which took in the highest number of asylum applicants per capita in the EU last year.