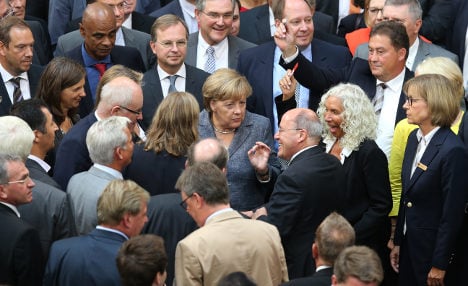 Chancellor Angela Merkel surrounded by MPs and party leaders in the Bundestag during the vote on Wednesday. Photo: DPA.

With 454 voting in favour of the bailout package, 113 against and 18 abstentions, 63 MPs from Angela Merkel's conservative Christian Democratic Union (CDU) voted against the plan, while three abstained and 17 were absent altogether – leaving the party with just 228 votes from its 311 MPs.

Finance Minister Wolfgang Schäuble had earlier opened debate on the bailout with a final call for his party colleagues' support.

“Of course after the experiences of the past months and years, there is no guarantee that everything will work. And doubts are always permitted.

“But given the fact that the Greek parliament has already agreed a majority of the measures, it would be irresponsible not to use the chance for a new beginning in Greece,” Schäuble said.

The Finance Minister went on to reassure MPs that the International Monetary Fund – which he called “indispensable” to the deal's credibility – would be on board by October.

But he warned that the government in Athens would have to stick to the commitments it had made to other members of the euro single currency, as well as ruling out a debt 'haircut'.

Schäuble and Chancellor Angela Merkel feared a sizeable rebellion from lawmakers within the ranks of the CDU despite the Finance Minister's new-found enthusiasm for the deal.

Rebellion in the ranks

Approval of the latest €86-billion emergency rescue plan for Athens was seen as assured given the 504 seats Merkel's left-right “grand coalition” holds in the 631-seat Bundestag lower house.

With the Netherlands, Germany is one of the last eurozone countries to vote, after positive results from other countries, including Spain, Austria, and Estonia earlier this week.

Social Democratic Party (SPD) leader in the Bundestag Thomas Oppermann mocked the far-left Linke (Left) party for “stabbing their sister party [Greek governing party Syriza] in the back” as he spoke in support of the deal.

But grumbling has grown ever louder within the CDU bloc over lifelines thrown to the Greek government of leftist Prime Minister Alexis Tsipras, an outspoken critic of the eurozone's de facto paymaster Germany.

Sixty of the 311 members in Merkel's parliamentary group voted last month against authorizing the start of negotiations with Greece on a new rescue package – defiance that was considered a blow to the chancellor.

And conservatives were urged to block the deal on Wednesday by an editorial in Germany's biggest selling tabloid, Bild, in which editor-in-chief Kai Diekmann urged MPs to vote against the package.

“On the contrary, it damages the European ideal because it divides, rather than unites. Worst still, the old ghosts of pre-EU Europe have resurfaced – the worst outcome of the EU's Greek policy,” referring to the divisive debates of recent months.

Before Wednesday's vote sources in Berlin said the number of those defectors could rise when MPs were called back from holidays to cast their ballots.

“If we're honest, this is a hidden debt haircut (writedown) at the expense of our children and grandchildren,” conservative lawmaker Dagmar Woehrl told Tuesday's Rheinische Post newspaper, signalling her decision to vote 'no'.

However, the Christian Democrats' general secretary, Peter Tauber, warned that a vote against the bailout was “tantamount to stabbing the Chancellor in the back” two years before the party fervently hopes to see her stand for a fourth term.

Underlining the stakes involved, the party's chief whip Volker Kauder this month vowed to impose sanctions on any dissidents in his ranks — a threat that may have backfired by antagonizing backbenchers.

Wednesday saw Merkel dispatch trusted allies, including her powerful hardline Finance Minister Wolfgang Schäuble, to talk conservative MPs out of allowing their misgivings to get the upper hand.

Schäuble threw his weight behind the plan approved by eurozone finance ministers on Friday in an interview with public broadcaster ZDF, calling support for it “the right decision with everything taken into account”.

Addressing nagging doubts about the International Monetary Fund's involvement in the bailout, a sacred cow to most conservatives, Schäuble asked them to trust the IMF would agree by October to participate in the bailout.

A Commerzbank research note outlined the reasons for the German attachment to IMF involvement in the bailout, seeing it as a guarantor of stability and rigour.

“The IMF is the only organisation which has decades of experience with helping failing countries,” it said.

“And it can only use this expertise if it has the opportunity to exercise pressure” by helping to foot the bill.

No debt writedown – but no Grexit

Schäuble last month floated the prospect of Greece taking a “timeout” from the euro as an alternative to a fresh bailout, horrifying some eurozone partners but convincing voters at home of his vigilance on conditions of aid to Athens.

Now, he has said repeatedly in interviews over the last week that he can ask German lawmakers to approve the rescue deal with a clear conscience.

Merkel on Sunday credited the “tough stance” by Berlin and Schäuble in particular with convincing Greece to swallow bitter pills she says are required to “get it back on its feet”, including deep-cutting economic
reforms.

In recent days Berlin has hailed a dramatic change in tone from Athens, particularly since the departure last month of flamboyant ex-finance minister Yanis Varoufakis, a virulent critic of Berlin's austerity demands.

But while the IMF has insisted on significant debt relief for Greece, Germany has ruled out a writedown and argued instead for longer maturities or lower interest rates on the principle.