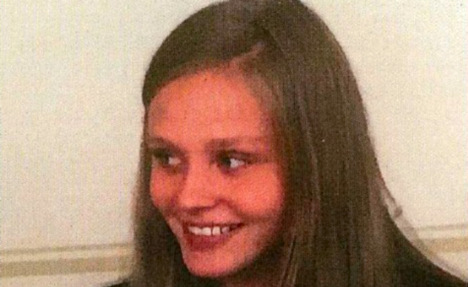 A photo of Anneli, who police confirmed had been found dead in a case that has shaken the country. Photo: DPA.

Two men aged 39 and 61 were arrested on Monday as suspects of the crime and faced a court hearing on Tuesday.

Anneli Marie R. went missing on Thursday evening after she was last seen going out for a bicycle ride with her dog, police said.

“All hopes and prayers have not been fulfilled,” said Dresden police chief Dieter Kroll at a press conference on Tuesday. “We express our utmost sympathy and sorrow to the family.”

Police said that two men forced the teen to get into their car on Thursday.

The kidnappers later used her cellphone to call her father, who police said was a businessman well-known in the community, and demanded a ransom of €1.2 million.

Police explained that because of the family's prominence, they believed at least one of the kidnappers knew what she looked like before the crime, from seeing her in town or looking on Facebook.

Police said the perpetrators most likely killed Anneli as a way to conceal their crime, for fear that she would be able to identify them if she were released since they had not worn masks.

Investigators said that she was probably killed as soon as Friday. When the kidnappers called the parents again on that day, the perpetrators refused to offer proof that she was still alive.

Friday was the last that the parents heard from the kidnappers.

Investigators were able on Sunday to identify one of the men, who had a criminal record, through traces of his DNA left on her bicycle discovered after she went missing.

After this finding, officers made the investigation public and the parents wrote an open letter to the kidnappers.

Officers said they also used cell phone-tracking to locate one of the men in Dresden. The second man was arrested in Bamberg, Bavaria. One of the suspects ultimately told investigators the location of her body.

Anneli's cause of death has still not been determined, pending a forensics investigation.