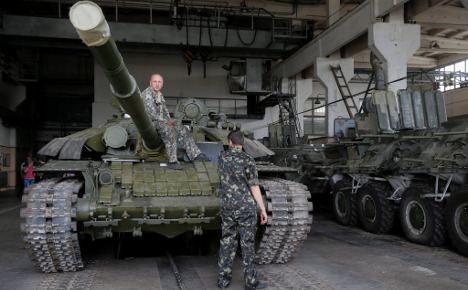 A tank belonging to the Ukrainian army in Kiev. Photo: DPA

“The situation in eastern Ukraine is explosive,” Steinmeier told Bild Am Sonntag.

“There's a lot at stake: if both parties to the conflict don't pay heed to the peace processs, we could enter a new spiral of military escalation at any time.”

Steinmeier has been engaged in a whirlwind round of visits and phone calls over the past week with his Russian and Ukrainian counterparts in an attempt to bring the two sides together for talks.

He suggested that “the armies of the parties to the conflict and the Organization for Security and Co-operation in Europe (OSCE) come together to discuss how the situation can be defused and the removal of arms can succeed.”

Sunday saw the “most intensive shooting for months” in Ukraine, a spokesman for the Ukrainian army told journalists in Kiev.

Four people were killed in the space of 24 hours and 23 people injured over the weekend.

Both the government in Kiev and leaders of the separatist eastern rebels have tried to lay the blame at the other side's feet.

The OSCE said on Sunday that the separatists had refused its observers access to their heavy weapons, which according to the Minsk Accords signed in February are supposed to have been withdrawn from the front lines.

Germany played a key role in brokering a ceasefire between pro-Russian separatists in east Ukraine and the Kiev government in February, nearly a year after Russia annexed the Crimean peninsula in Ukraine.

SEE ALSO: Germans, Russians trust each other less and less