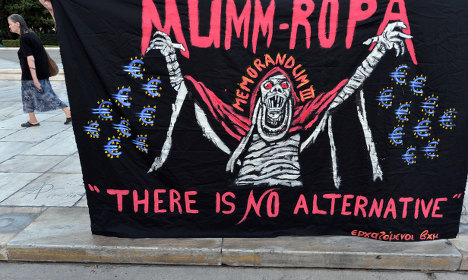 A woman walks past a banner in front of the Greek parliament in Athens, during a demonstration against the third bailout agreement last week. Photo: Louisa Gouliamaki / AFP

Ahead of a key vote in the German parliament to approve a third rescue package for its debt-mired eurozone partner, the influential Schäuble struck an upbeat, conciliatory note.

“After truly arduous negotiations, they understand now in Greece that the country cannot get around real and far-reaching reforms,” he told the Bild am Sonntag newspaper.

Schäuble, who has driven a tough bargain throughout the crisis talks with Athens, called an agreement reached Friday among the eurozone finance ministers “responsible” and “in keeping with the commitments made at a euro summit in July”.

He said that the eurozone countries would now be keeping close watch to ensure that the reforms-for-aid deal “is implemented point-by-point” in Greece.

One of Schäuble's deputies, Jens Spahn, said that he now expects talks on debt relief given the insistence of the International Monetary Fund, one of Greece's key creditors, on measures to bring Athens's debt mountain down to a manageable size.

But Spahn, seen as a rising star in Chancellor Angela Merkel's conservative Christian Democratic Union, told the Welt am Sonntag newspaper it marked “a decisive step forward that there is a general understanding that this is possible without a haircut” or debt writedown.

Germany has ruled out erasing any of Greece's debt from the books but has indicated it would be open to giving Athens more time to pay its creditors back if it continues to implement pro-market economic reforms.

As Europe's biggest economy and contributor to Greek aid, Germany has a key role in the emergency package approved by eurozone finance ministers worth 86 billion euros ($96 billion).

MPs from Germany's Bundestag lower house of parliament will be called back from the summer recess to vote on the bailout Wednesday.

Analysts say approval is almost certain, given that Merkel's governing coalition of conservatives and Social Democrats has 504 out of 631 seats in the assembly.

The main interest is in the scale of any revolt by deputies in Merkel’s conservative bloc, they say.

Merkel, who has been at pains to ensure Greece does not crash out of the eurozone, will address the chamber ahead of the vote before leaving on an official visit to Brazil.

She was due to give a wide-ranging interview to public television later on Sunday about the Greece crisis and other issues facing her government.