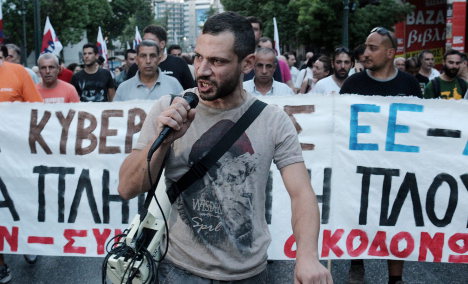 Greek trade unionists march through the streets of Athens against the third bailout package. Photo: DPA

“I am confident in the fact that we are going to get a result today,” Schäuble said as he arrived for the meeting of all 19 eurozone finance ministers in Brussels.

“If we do not get an accord today, then we will have to arrange a bridging loan,” he added, referring to emergency financing for Greece to cover a debt payment due on August 20th to the European Central Bank.

At the same time he said preparations for the meeting had “gone well.”

Schäuble has been consistently sceptical about the merits of the third rescue programme worth 85 billion euros ($95 billion) in return for far-reaching Greek economic reforms and austerity measures.

He has also strongly opposed any suggestion Greece's creditors – the EU, the European Central Bank and the International Monetary Fund – should agree to cut the country's massive debt mountain of €320 billion.

The IMF however has argued repeatedly that without debt relief, Greece has no hope of ever getting back on its feet and the ECB has backed that stance.

Finnish Finance Minister Alexander Stubb, who like Schäuble has taken a hard line on the bailout, said on arrivial in Brussels he was optimistic and “would be surprised if we do not get an agreement today”.

Stubb also said it was important to keep the IMF on board and that would be decided in October when the creditors are due to carry out a first review of the new bailout.

Under its own rules, the IMF cannot provide loans to a country which it believes may not be able to repay its debt.

Two previous bailouts have cost a combined €240 billion but failed to get Greece back on track.