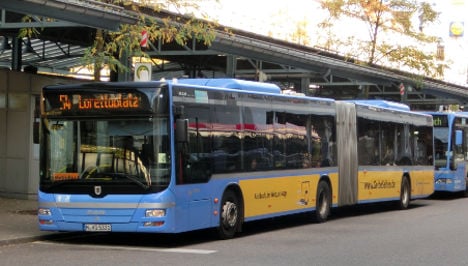 A photo of a bus in Munich. Photo: FreeSchhaltefolie / Wikimedia Commons

As soon as 30-year-old Bayram Yildiz stepped onto a Munich bus on Wednesday, he said he became the target of “vicious insults” from a fellow passenger.

“I was a hangman at Dachau [concentration camp],” a 60-year-old passenger called to Yildiz. “I'm going to remember your face.”

Yildiz, who was born in Bavaria and is of Turkish descent, told Münchner Tageszeitung (TZ) that he didn't know what to do.

But Yildiz said that others on the bus were quick to react, many standing up to defend him.

The bus driver even stopped the vehicle and threatened to call police if the older man did not leave immediately, to which passengers responded with applause.

“It went without saying that I had to step in,” the driver modestly told TZ.

Yildiz said he wanted to thank those who came to his defense.

“The help I received was simply wonderful,” he said.

“Because it all happened so quickly, I didn't get a chance to say thank you to everybody,” he told TZ, “so I'd like to do that now.”

The story of another Bavarian bus driver who made efforts to promote tolerance also grabbed media attention this week. Driver Sven Latteyer dug up his high-school English to welcome a group of refugees aboard his vehicle and became an overnight sensation after passengers praised him on Facebook.
And last weekend in Munich, some guests upset about seeing a prominent neo-Nazi sitting in a beer garden confronted him, telling him to leave.