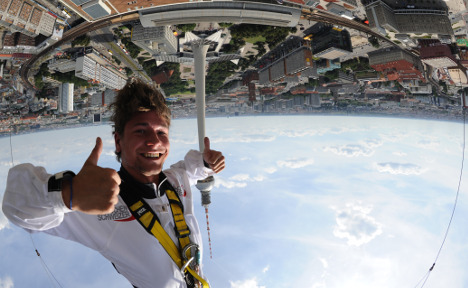 The report, carried out by New York-based research and analysis website ValuePenguin, puts Germany at number six in a list ranking the safety of 107 countries with accessible data.

The study is based on data gathered in seven topic areas including number of thefts, assaults and traffic deaths, CO2 emission levels, police officers per head of population and life expectancy.

But just because Germany is safe in certain ways, doesn't mean there's a lack of risky activities – in a more adventurous sense.

1. Speed around the world's scariest racetrack Any true petrolheads will probably have already dreamed many times about revving their engines at the famous Nürburgring in west Germany. This legendary racing complex features a Grand Prix track as well as the treacherous North Loop (Nordschliefe) – one of the longest racetracks in the world, ominously nicknamed  The Green Hell.

Built in the 1920s, the 20.8km-long track has 73 turns, according to its website, and has been dubbed one of the scariest tracks still in existence. Some estimate that the track has claimed the lives of more than 200 people over the years.

The venue offers “tourist drives”, when the weather is right, for visitors to bring their own cars or motorbikes to see for themselves if they can survive The Green Hell.

2. Free-fall next to Berlin's TV Tower: Photo: DPA.
If you want a birds-eye view of Berlin, you could go to the top of the sky-high TV Tower – or enjoy the view while free-falling for 125 meters next to it.

Brave participants are strapped into a harness attached to a winch and then jump to the ground where the controlled mechanism allows them to at first experience speeds near free-falling before they coast carefully to the target below.

3. Paraglide over the Bavarian Alps One way to see the scenic Bavarian Alps is to go skiing or snowboarding along their vast slopes. Another way to to simply glide over the top of them.
Various companies offer the chance to hang-glide or paraglide with a tandem partner over the peaks and dips of the gorgeous mountains in southern Germany – weather permitting, of course.

4. Climb to the top of Zugspitze Another way to reach new heights of adventure is to get to its highest peak – Zugspitze. Located at the German-Austrian border in the Wetterstein Mountains, this peak measures 2,962m (9,718 ft) above sea level.

Getting to the top is no Mount Everest, but the trek can take up to ten hours, depending on your skill and whether you take the riskier path. But once you get there, you’ll be able to cozy up to a beer and some Weisswurst at the Münchner Haus – in true Bavarian spirit.

5. Go kite-surfing on the North Sea This water activity combines a number of other extreme sports into one with elements of wakeboarding, windsurfing, surfing, paragliding and gymnastics, making it great for daredevils.