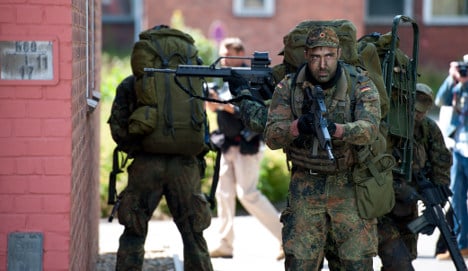 Soldiers from the German armed forces,(Bundeswehr) participate in an excercise. Photo: DPA.

In a statement to magazine Der Spiegel, the ministry said that in the next few years, it wants to invest up to €6 billion in repairing deficient airplanes, helicopters and tanks.

The department said that it wanted to have more spare parts and personnel in stock, but to reduce the number of different types of devices that the Bundeswehr (German armed forces) has.

The defence department has fielded mockery and criticism for reports since last year that the armed forces are embarrassingly unprepared for their operations.

The Bundeswehr struggled to get its first flight off the ground last September to deliver arms to Kurds fighting Isis in Iraq because the aircraft had a defect.

Military trainers that were supposed to be sent to the region to help the Kurds were stranded in Bulgaria at one point because their aircraft also had a problem.

Germany’s defence ministry was forced to admit last fall that it would be unable to fly home its soldiers battling Ebola in Africa if they got infected with the lethal disease because of a lack of transport planes.

The Bundeswehr also had to renege on promises to send drones to help monitor the Ukrainian-Russian border when it realized that the unmanned vehicles would not be able to withstand the freezing winter.

In addition, the standard rifle – the G36 – has been revealed to lose accuracy at high temperatures, a fact which the Bundeswehr appears to have been aware of for several years.

Commentators poked fun at the military after German soldiers were seen toting broomsticks instead of machine guns at a Nato demonstration earlier this year.
Many of the incidents have been blamed on years of under-funding.

On Friday, the defence ministry said that the planned €6 billion in repairs would not require additional funding to be secured because officials would restructure the budget to finance improvements.