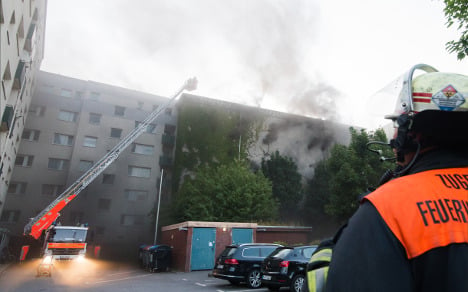 Several fire-fighters who rushed to the pre-dawn blaze were injured by the force of a blast strong enough to hurl debris and bicycles through the air.

As the fire continued to blaze, fire-fighters said they would try to douse the flames with foam to prevent the ignition of about 100 tons of essential oils stored in a carpentry workshop inside the bunker.

“For now we won't send anyone else into the building because the situation is unclear,” a fire brigade spokesman told DPA.

“We plan to flood the bunker with foam to extinguish the fire.”

Nine fire-fighters were among 11 people who suffered injuries, while another fire-fighter collapsed.

Officials said they were investigating the cause of the blaze in the concrete bunker in a residential area of the harbour side district of Rothenburgsort.

Hundreds of Nazi-era bunkers remain scattered across German cities, where they were often the only buildings to survive Allied bombing raids that destroyed surrounding neighbourhoods.

With their thick concrete walls, many bunkers proved too difficult to safely demolish after the war and city authorities opted to keep many of them to house businesses or as venues for cultural activities.