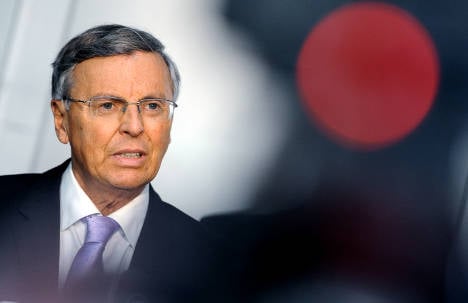 Bosbach, who made the announcement on Thursday, has been the most high-profile critic of party boss and Chancellor Angela Merkel's policies of providing billions of euros in bailout cash to Athens.

Bosbach is among a growing group of MPs within the CDU who are against providing further financial assistance to Athens and voiced his support earlier in July for a temporary 'Grexit,' the exit of Greece from the single currency for a temporary period of time.

Sixty Union (CDU/CSU) MPs including Bosbach voted against negotiating on a further €86 billion in bailout money for Athens, at a parliamentary vote on July 17th, a larger number than most analysts expected.

Speaking on Thursday, Bosbach said “due to [the government's stance on Greece] I will be giving up my position as chair of the home affairs select committee of the German parliament on September 22nd. From then on I will only be active as a representative of my constituency.”

Bosbach will continue to serve as Bundestag MP for Bergish Gladbach in North Rhine Westphalia, a position he has held for more than 20 years since 1994.

While none of Bosbach's colleagues at the top of the CDU publicly reacted to his departure, Ulla Jelpke and Jan Korte of the Linke (Left Party) voiced their disappointment, describing Bosbach as a fair, strident, yet humourous committee head.

Bosbach told journalists about his sense of moral quandary, explaining that he wanted to stay loyal to Merkel and Finance Minister Wolfgang Schäuble, but felt he had to stay true to his own conscience.

“I throw myself into every battle for Angela Merkel, but I can and will not vote against my convictions in the future,” he said.

But he announced he would stay on as a constituency MP because he did not want to disappoint those who had voted him in precisely because he provided a critical voice in parliament.