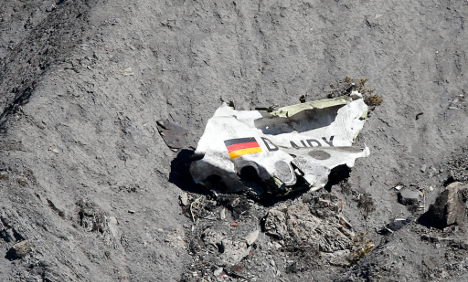 Relatives of German citizens among the 150 killed in the March 24 disaster, which has been blamed on a suicidal co-pilot, have turned down the parent company's compensation offer and accused it of ignoring their suffering.

The parents of 16 high school students killed wrote an open letter to Lufthansa CEO Carsten Spohr to voice “disappointment” at Lufthansa's conduct “since a pilot from your company killed our children”.

Prosecutors believe the jet's 27-year-old co-pilot, Andreas Lubitz, deliberately crashed the Airbus A320 into the French Alps, killing everyone on board.

“We are doing everything we can to ease the relatives' suffering.”

But Bartels rejected a claim by relatives that Spohr had ignored invitations to the funerals of some of the children, who were killed as they were returning from a school trip to Barcelona.

“Mr. Spohr did not receive any personal invitation to attend a funeral,” Bartels said.

“Mr. Spohr has spoken to many family members in person, but he could not speak to everyone one of them, out of more than 1,000 relatives.

“From day one Mr. Spohr has admitted to responsibility for the disaster and apologised for the suffering it has brought on to the families. We would give anything to undo this misfortune.”

Lufthansa, the parent company of low-cost carrier Germanwings, disbursed €50,000 per victim in immediate aid after the crash.

It said on June 30 that it would additionally offer compensation of €25,000 to the families of each of the 72 Germans killed, plus €10,000 to each immediate relative, including parents, children and spouses.

The group of 32 parents of students from the town of Haltern wrote that to put this value “on the life of each of our children and on our pain” was deeply offensive.

They are demanding a “six-figure sum”, their lawyer said Saturday, adding in Bild that families had asked for €200,000.
Lufthansa had said it planned to compensate relatives of non-German victims but it was too early to quantify the exact amount in all cases because laws differed in their countries of origin.