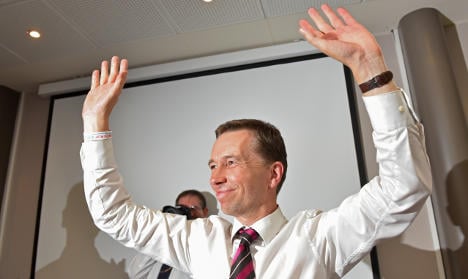 The economics professor, aged 55, was elected president of the new group called Alliance for Progress and Renewal (ALFA) at a founding congress which gathered 70 people in central Germany's Kassel.

The neo-liberal Lucke had been locked in a power struggle with Frauke Petry, who heads a national conservative faction, at his former party and was ousted from his leading role in early July.

Lucke subsequently quit the AfD completely, claiming that Islamophobic and xenophobic views were spreading in the party.

Petry, who won overwhelming backing to take over as AfD leader, has supported talks with the anti-Islam, anti-immigration PEGIDA movement which emerged late last year in the eastern state of Saxony.

Besides an anti-euro stance, Lucke said his party would also address immigration issues including the abuse of asylum rules.
“The migration policy is a problem in our country,” he was quoted as saying Sunday by German news agency DPA.

But he condemned his former party's shift further right that had brought it some local election success.

The AfD, founded in early 2013, won seven seats in the European Parliament in 2014, followed by representation in five German state assemblies.

Lucke claims that some 5,000 people have indicated their interest in joining his new group, which is setting its sights on 2017 general elections.