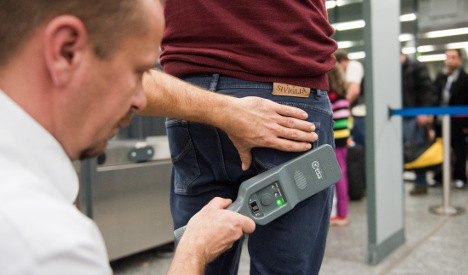 A man is checked with a portable metal detector at Frankfurt airport. Photo: DPA

“The concrete execution of these quality control measures is the responsibility of the federal states.“

Germany has been the target of legal action by the European Commission over lacking security at its airports, with the federal government so far denying that there was a problem.

But European officials say that Germany is breaching European regulations by checking security measures too infrequently and leaving gaps in its programme.

In May, an Interior Ministry spokesman had argued that the accusations only referred to an air security inspection in 2012, with the government having introduced improved security since then.

But the new admission shows that there are still problems two years later.

Deputy leader of the Linke (Left Party) group in the Bundestag Jan Korte told the MZ that the problems showed more officers should be hired at the Bundespolizei (federal police), which is reponsible for transport security.

He added that the government should undo the privatization of passenger security checks at airports.